Dos and Don'ts in the 10th lunar month 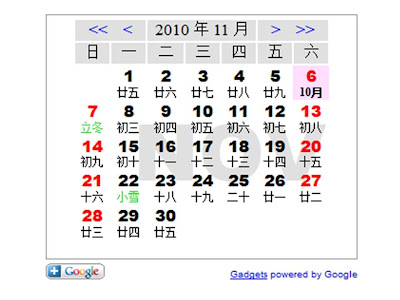 My late (paternal) grandmother (when she was alive) used to get up very early every morning to chant prayers. The first day of a lunar month is a different routine altogether. On this day, she would also prepare offerings to deities and ancestors at the different altars we have at home. This is one of two days in a month (the other being the 15th day) that my grandmother would be on a strict vegetarian diet - no meat, egg nor milk. She would use a different set of cutlery, crockery and utensils.

Now back to the lunar calendar... I received an email the other day from Singapore about predictions for the 10th lunar month. They sound scary to me. Some of us may not believe in such things but it's still a good read if nothing else. Below is reproduced in its entirety for your information or attention whichever...

There will be indications of conflict that extend from those between individuals up to those involving larger entities that include organizations as well as nations. These conflicts might be in the form of hostilities, violence and attacks. There might be war, terrorist attacks or other forms of aggression. People will tend to get angry easily and might resort to extreme measures during this month. Hence, it will not be a good idea to engage in direct conflicts with others or to provoke them. In addition, keep away from war zones, protest rallies or being caught up in gang fights. When you are interacting with others that might include friends, colleagues, family and even strangers, be sensitive to what is going on around you. Even when in public places, you might not want to attract needless attention or unintentionally irritate others as it might not take much for you to ignite a fiery response. Just imagine everybody as being similar to walking landmines. Do not end up being a victim of another’s rage.

There will be more natural disasters and the impact will be far greater than during the 9th lunar month that might result in greater damage and casualties. If you were to travel, you might want to gather geographical information about the areas that you will be visiting. Even though some of the natural disasters might have passed, they might have left some potential dangers in the areas affected such as diseases, loose rocks, sand, earth etc. Aside from natural disasters, there might be outbreaks of diseases that could lead to new illnesses or mutated germs that will cause many people to fall ill easily. For those who have young children and elderly at home, you might want to pay special attention to this.

Another significant sign during the 10th lunar month is that there will be large masses of people moving. This will not refer to many people moving homes or taking vacations. Such movements during this month might refer predominantly to those driven away by natural disasters or fleeing from war or chaos. This might also refer to evacuations or something more sinister.

Probably by now, you will understand the reasons for advising against travelling during this month. If you are required to travel, please bring along the Jade item that you have purchased from me for protection. Some of you might be in careers that involve higher risk requiring you to be present in dangerous places. Please be extra careful about your own safety and provide me your usual trip information. If you will be staying in areas/countries that will be more susceptible to natural disasters, you might want to remain alert about the safety precautions that you need to take to act accordingly.

Having said all this, the 10th lunar month will be a great month to make money, but unfortunately in a negative manner. There will be people making good money during this month due to others’ foolishness or to live on other people’s suffering and pain. The purpose of letting you know this is not to encourage you to take advantage but to avoid being cheated and to be wary of such people. For example, some people or organizations might raise funds in the name of helping victims But such donations will not reach the intended recipients. There will also be those earning money through scams requesting money to assist people you know or getting them out of trouble.

For those who wish to cleanse their crystals or have been using their crystals actively, you might want to use the moonlight of the 21th November 2010 to do so.

Feel free to circulate this email to friends and relatives or anyone who is interested.

Have a safe and wonderful 10th lunar month.
Posted by HappySurfer at 9:23 AM