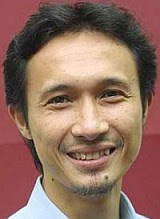 This is sad. That a BernamaTV cameraman was killed in Somalia by a stray bullet on a humanitarian aid mission. Noramfaizul Mohd Nor, 41, passed away at 11.07pm while receiving medical attention.

From The Star: According to BernamaTV journalist Khairulanuar Yahaya, Noramfaizul was travelling with members of the electronic media on a truck heading to the city's commercial centre to send visuals that were earlier recorded.

Khairulanuar said shots were fired at a government army truck that was accompanying the media vehicle and a stray bullet hit Noramfaizul, who was seated by the door. The bullet pierced his lungs. More..

Email ThisBlogThis!Share to TwitterShare to FacebookShare to Pinterest
Labels: Somalia