Just read from The Star about the earthquakes in southwest China yesterday afternoon. 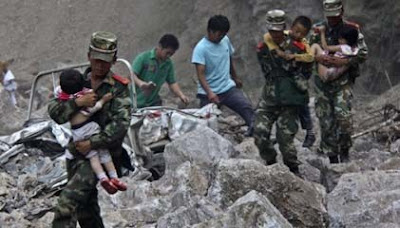 It was report that at least 67 people were killed and 731 injured when two earthquakes struck a remote and mountainous area of southwest China on Friday, toppling houses and sending panicked crowds onto the streets.

Residents described how people ran out of buildings screaming as the two shallow quakes hit on the border of Yunnan and Guizhou provinces an hour apart around the middle of the day. A string of aftershocks followed.

Authorities were sending thousands of tents, quilts and coats, and Premier Wen Jiabao was also heading to the area, the state Xinhua news agency said, confirming the death and injured toll, which rose steadily throughout the day. More in The Star..China quakes kill 67, injure 731

According to the US Geological Survey, the first quake struck at 11.20 am (0320 GMT) at a depth of around 10 kilometres (six miles), and the second quake around an hour later, putting the magnitude of both at 5.6.

From NY Times, image below shows two buses navigating a road of fallen rocks after a series of earthquakes in southwest China on Friday. 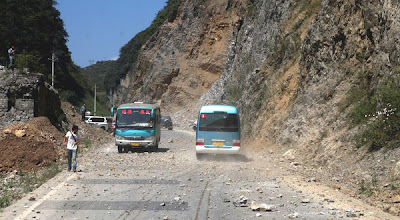 From NT Times:
More than 200,000 people were evacuated from their homes in Yunnan, a province known for its scenic beauty and ethnic diversity, said the Yunnan Provincial Civil Affairs Bureau. Prime Minister Wen Jiabao flew to the earthquake zone on Friday evening.

In the town of Luozehe, a rice- and tobacco-growing area in northeastern Yunnan, 46 people were killed, more than 700 people were injured and more than 120,000 homes seriously damaged.

The earthquake was so violent that rocks from landslides crushed cars in Luozehe, a water company worker, Tan Xuewen, said in a telephone interview. “Suddenly we felt the strong earthquake,” Mr. Tan said. “Huge rocks fell off the mountain. I immediately grabbed an old person and began to run.”

At a tiny primary school in Luozehe, the teacher, Ma Decai, said his 11 students, ages 9 to 12, were eating lunch in the dining room when the earthquake hit.

“Dirt dropped from the ceiling into our bowls and cooking pots,” Mr. Ma said. The students abandoned their meals and ran out of the room, he said. As he tried to prepare a new lunch for the students, aftershocks struck the building.

Large cracks appeared in the mud and stone schoolhouse, and the toilet collapsed.

In neighboring Guizhou Province, the authorities said they knew of no casualties. But homes in rural Guizhou, often built of wood and mud, are usually constructed on hillsides, and provincial authorities said some homes had been damaged or destroyed.

Tents, blankets and coats were being sent to the region, the official Xinhua news agency said.

Guizhou, an area of rice farms and coal mines, is also undergoing major development, with hundreds of millions of dollars pumped into the province in the last year to build roads, bridges and industrial zones. It was not immediately known if any of the new projects were damaged by the earthquake.
More on NY Times..Earthquakes in China Kill Dozens

A video from Associated Press..


and another closeup showing the damage..