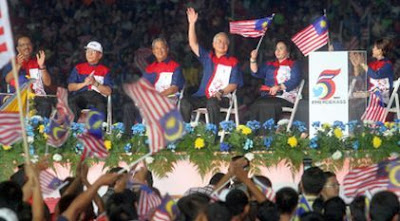 Malaysia celebrated Merdeka Day yesterday, Aug 31, marking 55 years of independence from Britain. The country has come a long way and achieved much though sadly, we have fallen behind in some key areas. Democracy and equality in their true sense are not practised in this country. Hopefully, it won't take another 55 years to achieve the true state of democracy and equality.

The image above shows the Prime Minister, Datuk Seri Najib Tun Razak, waving to tens of thousands of Malaysians gathered at the National Stadium in Bukit Jalil for the Promises Fulfilled rally in conjunction with the Merdeka Day celebrations last night.

The theme for this year's Independence Day is '1Malaysia Promises Fulfilled' which some say is politically-inclined and does not reflect a theme for the nation's celebration of independence. 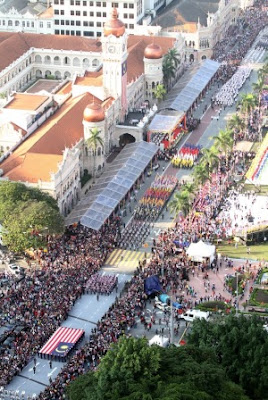 A little update on the Merdeka Day celebration in Kuala Lumpur yesterday..

A belated Happy Merdeka Day nevertheless. A Google Malaysia doodle to commemorate the occasion of the 2012 Merdeka Day. The logo depicts Malaysia's national flower, the Hibiscus. 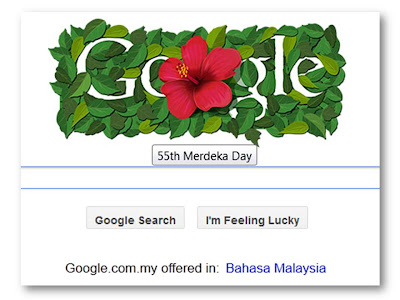 Posted by HappySurfer at 9:23 AM