It all started with this video, Psy Gangnam Style, a South Korean number that has taken the country, no, the world by storm.

Is it the singer, the song, the dancing, the colorful outfits or even the Gangnam gu (neighbourhood)? It's everything that's got the world fascinated and talking about it.

Psy's big hit "Gangnam Style" has also spawned various reaction videos and parodies with the more popular ones receiving millions of views and turning the horse-riding dance into a dance fad around the world.

How about a Sabah Gangnam Style..a good effort here, though it has yet to meet the 1 million mark.

More proof that Malaysians are certainly in on the action on Gangnam Style. Look, even grandpa is doing the horse-riding dance in Penang. (Note the art piece behind grandpa. That's for another post. Stay tuned..) 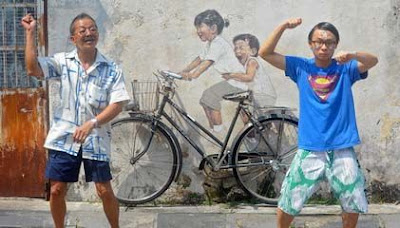 On August 21, 2012, Gangnam Style officially charted #1 on the iTunes Music Video Charts, overtaking Justin Bieber's As Long as You Love Me and Katy Perry's Wide Awake; this feat is the first for any South Korean artist. In South Korea the song was an instant success selling 745,000 downloads in its first week and remains atop the Gaon Single Chart for five consecutive weeks since debut. As of August 23, the song was downloaded over 2,545,837 times in South Korea alone. In Finland the track took the number one place on the official download chart. (Wikipedia)

Who is Psy? Psy is a 34-year-old South Korean rapper, whose real name is Park Jae-Sang while his stage name, Psy, is short for Psycho. Psy attended Boston University and the Berklee College of Music in America, and apart from writing his own songs, he also composes songs for other singers. He is married with two daughters.

"Gangnam Style" is widely praised for its humour, catchy rhythm as well as Psy's unusual horse-riding dance moves that have introduced many people outside Korea to K-pop. Gangnam Style has been talked about and featured in many foreign broadcasting networks and newspapers. Even notable artistes such as the British singer Robbie Williams and Josh Groban have also mentioned about the music video on Twitter.

Josh Groban, British opera singer, is one of the earliest celebrities to tweet about Psy’s infectious video, who on July 31 posted a link to the video and said, “It’s a Gangnam Style world, we’re just living in it. Amazing video.”

Britney Spears tweeted "I am LOVING this video – so fun! Thinking that I should possibly learn the choreography. Anybody wanna teach me?

On August 16, 2012, Nelly Furtado performed an English version of the song in her concert in the Araneta Coliseum in Quezon City, Metro Manila, Philippines.

Everyone is doing the fun horse-riding Gangnam Style dance. Are you? If you haven't, here's how. To start, the shades, don't forget the shades.. LOL! 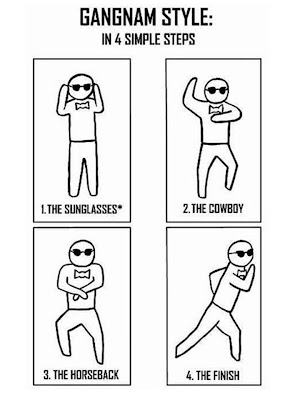 Posted by HappySurfer at 9:28 AM