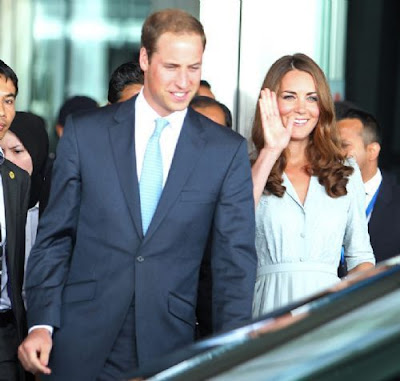 Source
The Duke and Duchess of Cambridge, Prince William and Kate Middleton, are on a tour of the Far East as representatives of Queen Elizabeth II in conjunction with the celebration of her Diamond Jubilee. Malaysia is included in the itinerary. Their Royal Highnesses arrived at KL International Airport on Thursday, Sep 13, to begin their three-day official visit in the city.

Malaysia was their second destination after Singapore in their 9-day tour of the Far East and South Pacific. Let's trace their footsteps a little to see the activities they have been involved in.. 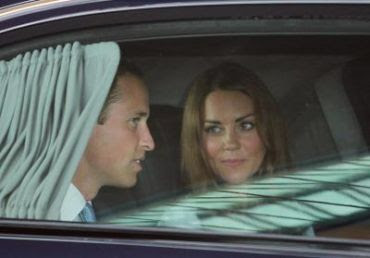 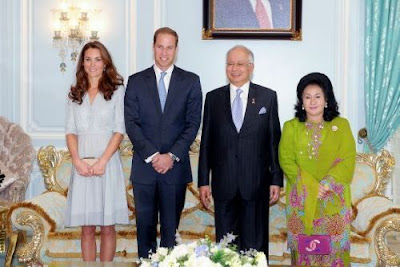 The royal couple later visited Hospis Malaysia, a charitable organisation which offers professional palliative care to patients suffering from life-limited illnesses, and received a warm welcome from residents and children from a nearby kindergarten. 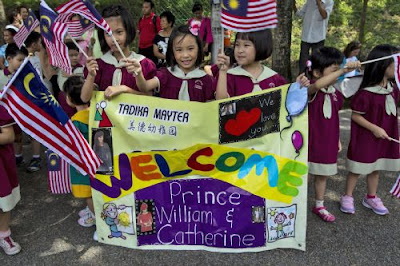 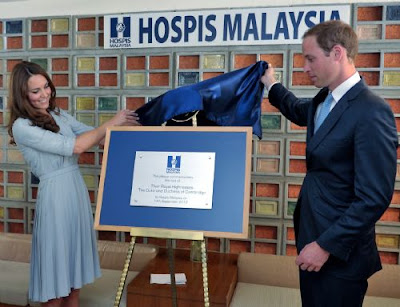 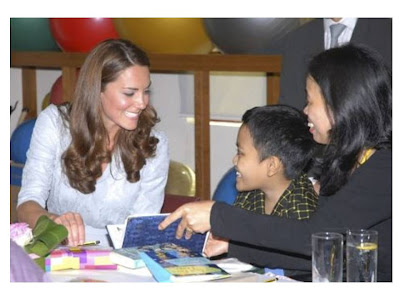 In the evening, the Duke and Duchess of Cambridge had an audience with the King and Queen, Yang di-Pertuan Agong Tuanku Abdul Halim Mu'adzam Shah and Raja Permaisuri Agong Tuanku Hajah Haminah and attended a royal banquet at Istana Negara. 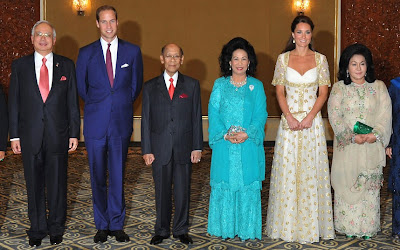 The Duke and Duchess of Cambridge pose for a photograph with Malaysian King Sultan Abdul Halim Mu'adzam Shah, Queen Haminah Hamidun, Malaysian Prime Minister Najib Razak and wife Rosmah Mansor at the palace in Kuala Lumpur - Source
Included in the royal couple's itinerary was a visit to the Kuala Lumpur City Centre and in Sabah, the Danum Valley, a primary tropical rainforest in Sabah. They left for the Solomon Islands on Sunday (yesterday).

School children waiting to welcome the arrival of Prince William and Kate Middleton during their 'cultural walkabout' at KLCC Park in Kuala Lumpur on Friday. The iconic Petronas Twin Towers in the background. - 14 September, 2012 - Source 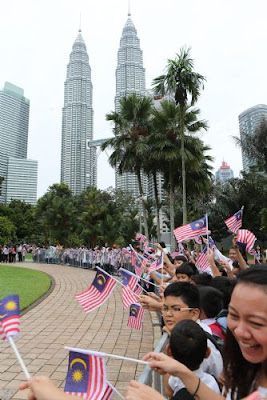 Wonderful weather for a walkabout in the KLCC Park. Pretty flowers for a pretty lady.. 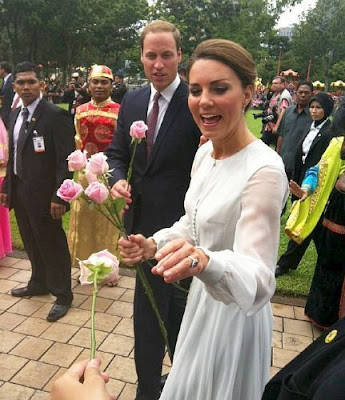 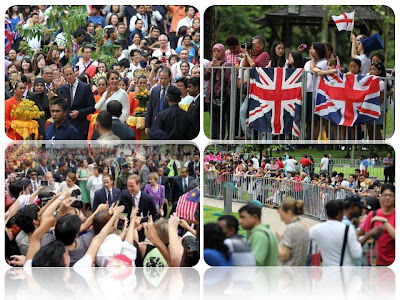 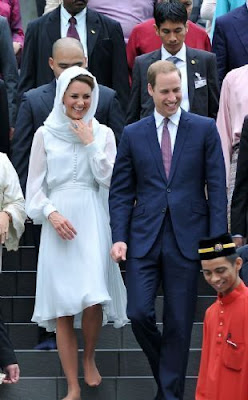 Respectful: Prince William and his wife Kate take their shoes off - Source 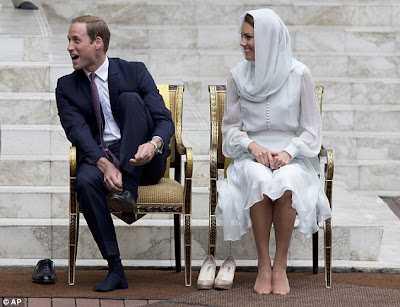 Prince William, the Duke of Cambridge, giving a speech during a business luncheon hosted by the British Malaysian Chamber of Commerce at Kuala Lumpur Convention Centre on Friday. - Reuters - 14 September, 2012 - Source 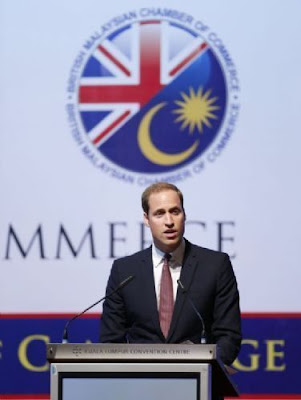 Brave face: The Duchess of Cambridge smiled her way through a tea party at the British High Commission in Kuala Lumpur despite the news that a French magazine has published topless pictures of her on holiday - Source 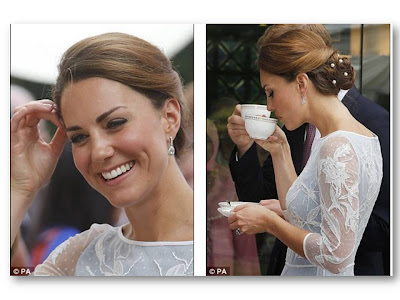 Grim faced: With lips pursed, the Royal pair head down the red carpet towards a waiting Boeing 737-800 jet at Kuala lumpur's airport taking them to their next stop, Sabah, East Malaysia. 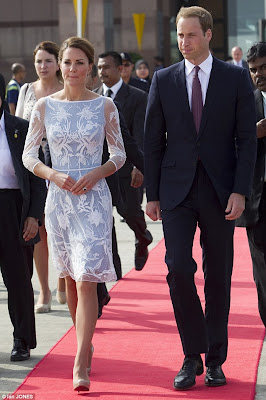 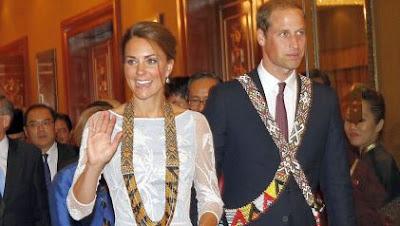 Duke and Duchess of Cambridge, Prince William and Kate Middleton, wear the beaded jewellery Pinakol, synonymous with the Rungus ethnic culture, on their arrival at the Shangri-La Tanjung Aru Beach Resort in Kota Kinabalu for a two-day visit to Sabah. NORMIMIE DIUN/The Star

The royal couple visited a rainforest in Borneo and enjoyed the high life - by being hoisted up a 130ft rainforest tree by ropes and walking along a 300-metre long canopy bridge.

William and Kate toured the Danum Valley research centre in Sabah, one of the two States that make up the Malaysian part of Borneo. More: Dailymail - including a video 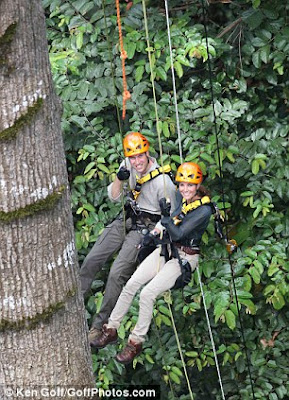 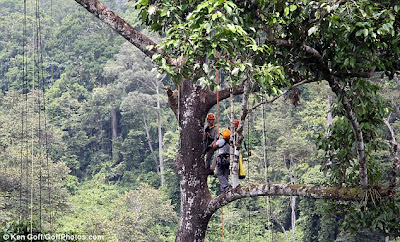 After lunch, much to their delight, they were lucky enough to catch a glimpse of an Orang-Utan family, a mother, father and their baby, while with a guide from the lodge. 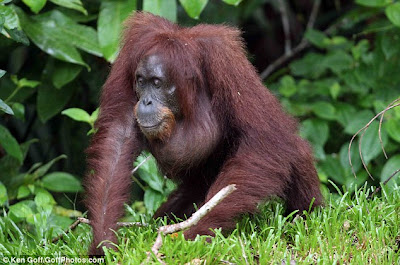 The couple have vowed not to let the furore over a magazine's decision to publish topless pictures of the Duchess derail their nine-day Diamond Jubilee tour of South East Asia and the South Pacific.

The say they are determined to press ahead with their high profile visit.

A source close to William and Kate, said they felt intense anger and disappointment at what had happened but believed very strongly that the tour was far too important to British interests abroad to be allowed to suffer.

'The Duke and Duchess are hugely disappointed by what has happened but both feel very strongly that it should be business as usual,' the source said.

'They feel it has been a great success so far and have thoroughly enjoyed the places they have visited and the people they have met.

The couple launched a legal action in the French courts against Closer magazine for what they described as a 'grotesque' and 'unjustifiable' breach of their privacy.

The Duke and Duchess of Cambridge, Prince William and his wife Kate Middleton, concluded their four-day visit to Malaysia Sunday.

They were given a traditional red carpet send-off at the Kota Kinabalu International Airport at about 7am. Next stop: the Solomon Islands and Tuvalu.

On to Solomon Islands: Kate is crowned an Island Princess as she wears decorative headpiece given by well-wishers during village visit in South Pacific 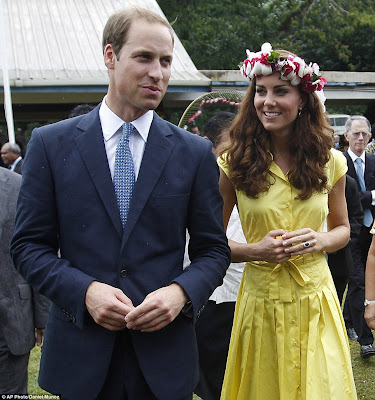 Related articles:
- Prince William and Kate Middleton arrive for three-day visit
- Royal couple endear themselves to guests with down-to-earth approach
- Tea and sympathy for Kate as she puts on a brave smile but grim-faced William shows his anger after topless photo outrage
- Scene of the crime: Royals confirm legal action against French mag as we reveal spot where long-lens photo of topless Kate was taken
- Will and Kate end Malaysia visit and head for Solomon Islands
- 'I'm going to go whee and fly the way up': Wills and Kate are royal high-nesses as they forget their troubles by being hoisted up a 130ft tree in Borneo rainforest
- Kate is crowned an Island Princess as she wears decorative headpiece given by well-wishers during village visit in South Pacific