If you are a user of Jalan Jelatek, you would have noticed a couple of bungalows high up on the hill at Bukit Setiawangsa. A colleague once mentioned that the price of those bungalows have appreciated many times over. I wonder what's he thinking now. 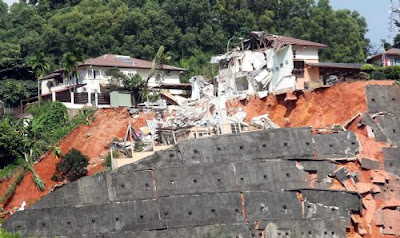 This is what you will see at Bukit Setiawangsa, Kuala Lumpur, whose concrete embankment has collapsed due to soil erosion subsequently resulting in a landslide.

According to Puncak Setiawangsa residents association assistant chairman Fauziah Jamaluddin, only homes and shoplots opposite the site would be affected and other houses in the area are not affected, people can go home and move around freely.

As reported in another article, Fauziah Jamaluddin said that many of the residents in the area were on holiday, and had not been in their homes when the embankment collapsed on Friday night.

Kuala Lumpur City Hall (DBKL) will be making an alternative route for residents to move in and out to ease congestion as the road needs to be closed.

DBKL has prepared the community centre for residents to stay in. Food will also be provided.

Eight luxury bungalows near the collapsed barrier have been extensively damaged, with one house being split into two.

Mayor Datuk Ahmad Phesal Talib confirmed that so far seven houses were badly effected while 57 other families have been evacuated.

What happened was the concrete barrier crumbled at 10pm Friday night and buried the only access road from Taman Puncak Setiawangsa. 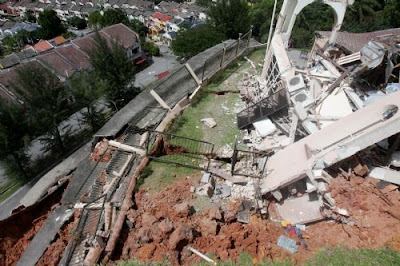 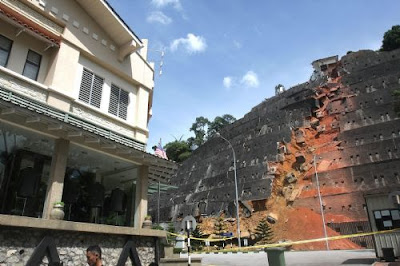 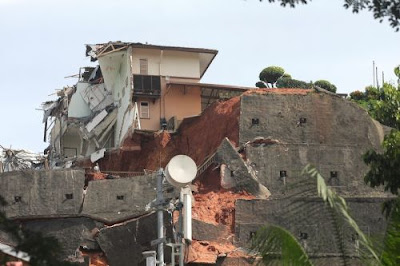 Dec 30 Update:
- House 39 atop collapsed wall to be demolished by Monday, say police
- Makeshift media centre set up in Setiawangsa
- Wary of a bigger collapse, some watch and wait while others move out 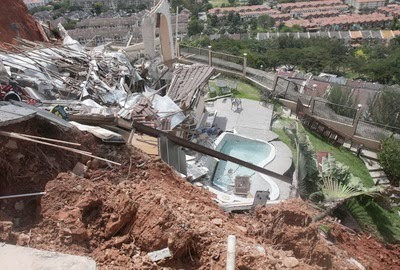 The section of the house near the swimming pool sitting metres below after the collapse. - The Star
Jan 1, 2013 Update
- Work to demolish damaged house begins 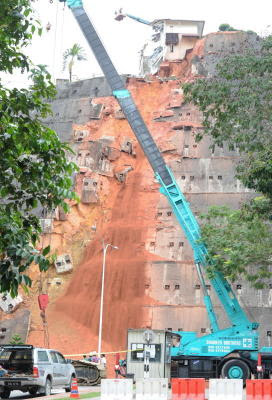 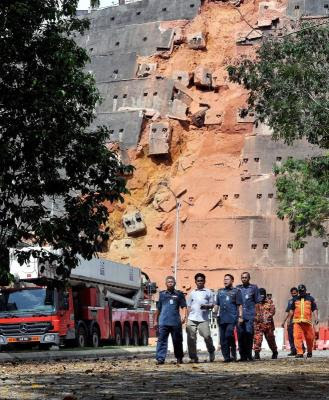