Oh dear! I just read about the tunnel collapse in Japan. 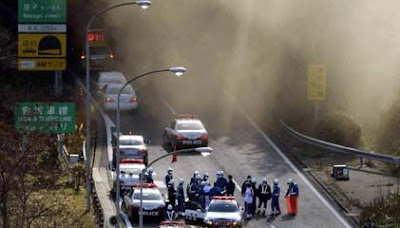 At least seven people were trapped inside a highway tunnel in Japan after it collapsed on Sunday, setting a car ablaze and raising fears of another cave-in that forced a halt to rescue efforts.

Two vehicles were crushed in the original collapse and one other was set ablaze when large concrete ceiling panels fell in inside one of Japan's longest motorway tunnels at nearly five kilometres long.

A comprehensive rescue effort was launched but more than five hours after the incident, workers pulled out of the tunnel because of concerns that more of the roof might collapse, a fire official told AFP.

The cave-in happened on Tokyo-bound lanes of the Sasago tunnel on the Chuo Expressway, 80 kilometres (50 miles) west of the capital, at around 8:00 am (2300 GMT Saturday), an official at the expressway traffic police said.

Posted by HappySurfer at 4:51 PM

Email ThisBlogThis!Share to TwitterShare to FacebookShare to Pinterest
Labels: Japan