Are you for or against the Lynas rare earth plant being in Malaysia?

Whether we like it or not and despite strong protests from various groups and residents of the area, the facility has started its operations.

The Star reported yesterday that

Amid fresh attempts to stop the rare earth refinery here, Lynas Corporation has announced that it has started operations. 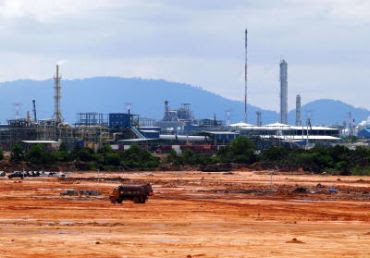 The Australian mining firm said the first feed to the kiln was now under way at the Lynas Advanced Materials Plant (LAMP) in Gebeng. More: First feed to LAMP kiln under way, says Lynas

This is where the Lynas plant is located. It's in Kuantan, an east coast state in Peninsula Malaysia. If you look at the world map, Malaysia is in fact a very small country as compared to Australia where the rare earth is being shipped from. Should anything untoward happen, imagine the extent of damage it will have on the people here.

When it was first known that Lynas will operate here in Malaysia, many wondered as to why it could not be operated from its source, Australia. A map from an email I received earlier indicates that the landmass of Australia is big enough to accommodate the whole of Europe with land to spare. Why don't the operation be done locally instead of having it moved to a little land like Malaysia? Your guess is as good as mine.. 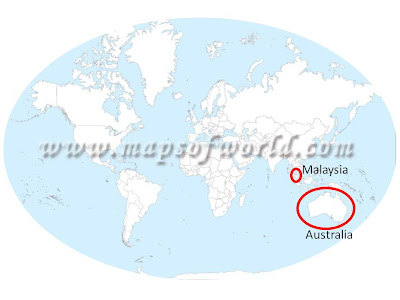 It is obvious that Malaysia has not learned from an earlier experience. We used to have a rare earth plant at Bukit Merah, a little south of Ipoh, in the north.

Freemalaysiatoday has an informative article on it. Read on..

To understand today, we sometimes have to look back at yesterday. To understand why there is so much opposition to the Lynas rare earth plant, we have to look at the sad history of Bukit Merah New Village, just a few kilometres south of downtown Ipoh.

Life changed forever for the mainly Hakka community of Bukit Merah after Asian Rare Earth Sdn Bhd (ARE) began operations there in July 1982 to extract yttrium, a rare earth, from monazite.

Within a few years, the villagers began noticing physical defects in their newborns, and at least eight leukaemia cases were confirmed. Medical examinations on children in the area found that nearly 40% of them suffered from lymph node diseases, turbinate congestion and recurrent rhinitis. Seven of the leukaemia victims have since died.

UPDATE:
If it's any consolation, Lynas has been told to Ship it out of Malaysia or ship out.