Rain at last! Rain yesterday evening in several parts of the Klang Valley brought relief from the haze.

What a welcome sight!

The rain in varying degrees from a light drizzle in some parts of Petaling Jaya and Cheras to heavier rain in Shah Alam, Subang Jaya, Gombak, Kepong and Seri Kembangan. Someone claimed on Twitter that hail fell in Seri Kembangan.

Here in Kuala Lumpur, though the air is not stuffy, it is a lot cooler as a matter of fact, the haze is still apparent even after the rain yesterday as well as during the small hours of the night. The API readings looked a lot more positive generally as at 7am this morning, June 26, but schools in parts of Selangor and Manjung, Perak are closed today due to the high API reading.

Shown below are API or PSI readings for the keenly-watched cities in Malaysia. API readings for other areas in the country can be viewed on the DOE website. 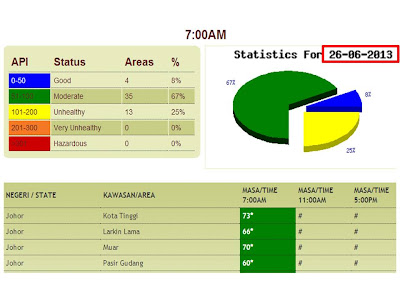 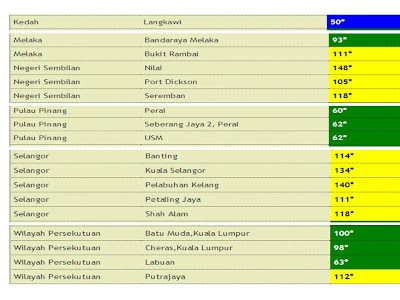 Meanwhile, fires are still raging in the Riau province. Satellite pictures have detected about 200 fires on plantations in the area. Indonesian authorities warned motorists and fishermen in parts of the province to stay home this week due to poor visibility from the haze. It has been reported that about 1,100 residents were forced to flee Rantau Bais and Bangko Pusako villages in Riau province Tuesday as acrid smoke from nearby burning peat swamps and palm oil plantations made breathing difficult, said local police spokesman Lt. Col. Hermansyah.

This is Dumai. This would have made a captivating scenery in normal weather conditions without the current choking smog that is shrouding the town and its surrounding areas. 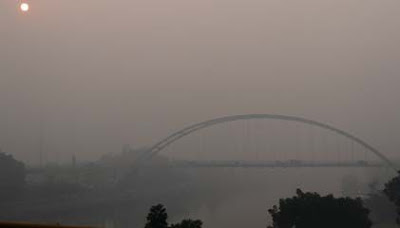 It has been reported that Dumai is the epicentre of the haze. If this is so, this explains why Muar and Malacca are the places with the highest PSI reading, the reading for Muar exceeding 750!

The Straits Times Singapore reported today that in Muar, an asthmatic woman died on Sunday, a first Malaysian death blamed on smog.

There are boats (doing barter trading as well as ferrying people across) plying daily from Dumai to Muar and a few other coastal towns on the west coast. Below is a Google map indicating their proximity.


View Larger Map
As we speak, the peat fires are still raging in Dumai in the Riau province. A reporter from The Star on the scene while sitting at a stall by a centre coordinating efforts by a special unit to fight peat fire, was asked if Malaysia could send help to put an end to the smog from peat fires.

“We have minimal equipment, only a water pump and hose to put out the smoke,” said the man named Nafi.

“Hopefully, Malaysia could send an aircraft to help us,” he added.

(Indonesia exports smoke and manpower to Malaysia, Malaysia in turn exports drugs and terrorists to Indonesia.)


And over in the south, Singapore experienced freak weather conditions, including hail that wreaked havoc in the western part of Singapore yesterday afternoon. 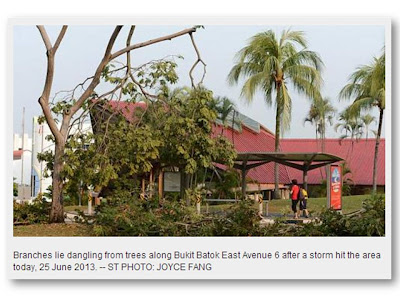 The Singapore National Environment Agency (NEA) has confirmed that the hail, which some residents, particularly those living in the western parts of Singapore experienced, is not caused by the cloud seeding in Indonesia. It added that the heavy downpour on Tuesday afternoon was not toxic.