You can read the latest update on the HAZE here.

"How bad is the air in kuala lumpur, malaysia now?" This is a valid question if you are planning a trip to Malaysia. Seven people asked this question and landed here on this site.

Yeah, how bad is the air here in Kuala Lumpur today? 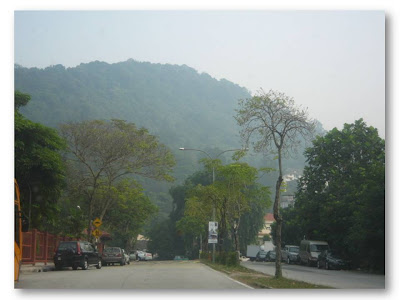 When I woke up this morning, the air though not clear, was devoid of the smell of barbecue unlike the air yesterday. So that is good news to start with.  Not everyone was wearing a mask on the way to work this morning from my observation.  On ground level, the air didn't smell or feel bad.  In a highrise, it could be different though with the PSI in KL still at an unhealthy level.

The DOE website is able to be accessed today, so let's take a look at the PSI reading here in KL as well as in other parts Malaysia. In Malaysia, we refer to the index as API (Air Pollutant Index) as opposed to the Pollutant Standards Index (PSI) used in Singapore.

Here's a comparison of two pie-charts.  The chart on top is the API/PSI as at 7am this morning, June 25. The one below shows the index about a week ago on June 19 at 7am. Hilited are Muar, Penang, Kuala Lumpur, Petaling Jaya and Shah Alam. If you are looking for a Singapore reading, the ones for Johore are a good indication as Singapore is in the same vicinity separated by just a narrow Straits of Johore. However, the haze has eased in the city-state with a moderate PSI reading of 51-100 today as reported by Straits Times. The wind has shifted the haze to further north beyond Muar and Malacca.  More of that in a minute..

In Kuala Lumpur, the pollution index (PSI) neared the "very unhealthy" 200 level for the first time during the current outbreak - a KL PSI reading of 186 at 7am this morning.

Schools in Kuala Lumpur (and several states) were ordered to close if the PSI hits 300 and authorities advised parents to keep children indoors or make them wear face masks outside.

From both charts, you'd be able to tell that more areas in the country are now at unhealthy levels (yellow wedge) as compared to last week.  Green would put us in a healthier position though the norm (for much of the year) here in Malaysia is the blue reading which unfortunately shows only 6% of the country being at this level this morning. 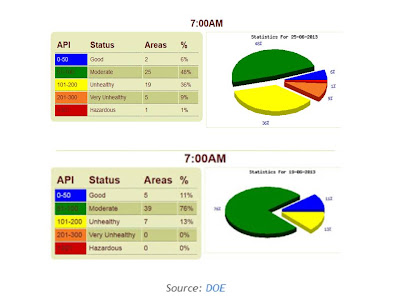 You may be interested in specific PSI levels for the different towns and cities in Malaysia, so here are the readings. All readings are for 7am this morning, June 15 - courtesy of DOE. 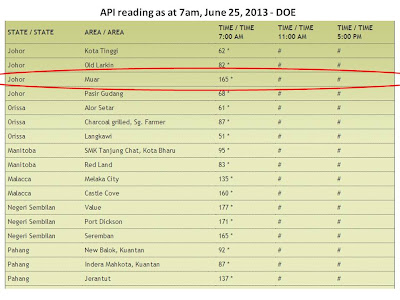 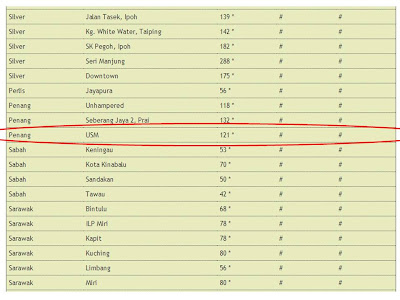 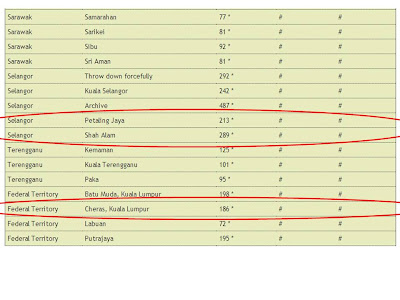 In Penang, the Air Pollutant Index (API) readings today surged to unhealthy levels on the island, a rise from the moderate readings recorded on yesterday.

As of 7am, the API readings at Universiti Sains Malaysia (USM) hit 121, a major increase from 81 at 5pm the previous day. - The Star


In Port Klang, Ships still setting out to sea at the Pulau Ketam Jetty..

Port Klang residents are hanging on to their face masks, as thick haze drove the API reading to a high of 495 Tuesday morning.

The Department of Environment recorded the latest reading at 8am. Only an hour earlier, the reading was at 487, a spike from Monday's evening's already hazardous reading of 319. - The Star


Meanwhile in Muar, Johore, the state of emergency has been lifted and schools reopen.. 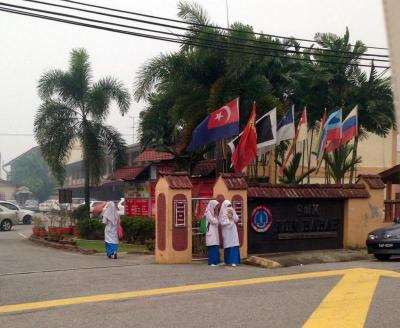 Now is not the time for the blame game but in a goodwill gesture and in a bid to ease tensions after the haze triggered a war of words between Jakarta and its neighbours, with an Indonesian minister at one point accusing Singapore of acting "like a child", Indonesian President Susilo Bambang Yudhoyono has apologised to Singapore and Malaysia after the two countries were cloaked in thick haze from raging forest fires on Sumatra island.

"As the president of Indonesia, I apologise for what has happened and ask for the understanding of the people of Malaysia and Singapore," he said late Monday.

"We accept it is our responsibility to tackle the problem." - The Star


Indonesia is trying its utmost to extinguish the fires by using helicopters and planes for water-bombing and cloud-seeding, which chemically induces rain, but officials say the efforts have so far had little success.

Yesterday, Indonesian state news agency, Anatara, reported that two flights had to be turned back from the airport in the provincial capital, Pekanbaru, due to the thick haze shrouding Riau province where the blazes are centred. Riau province is the closest to and at the same latitude belt as Muar and Singapore explaining why these two places have suffered the most in this haze.

The smoky haze in the region from Sumatra is a recurring problem during the June-September dry season, when smallholders and plantations alike set fires to prepare land for cultivation despite a legal ban.

Apparently, we are not the only ones affected by the smog as it has been reported that birds are waking up much later to forage for food the past few days.

Cats and dogs are also not too keen on going out.

Veterinarian Dr M.Vijayndra suggests that pet owners to continue to walk their pets, although the time could be shortened, especially for those prone to problems.

Still planning that trip to Kuala Lumpur? Come on over!

Posted by HappySurfer at 3:08 PM