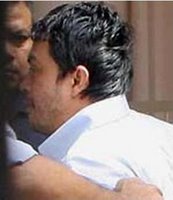 KUALA LUMPUR: Political analyst Abdul Razak Baginda has been charged at a magistrate’s court here with abetting in the murder of Mongolian beauty Altantuya Shaariibuu.

The 46-year-old Abdul Razak was accused of abetting C/Insp Azilah Hadri and Kpl Sirul Azhar Umar to commit the crime, which ended with the body of the 28-year-old Altantuya being blown to bits with explosives.

Abdul Razak is alleged to have committed the offence between 9.54am and 11.05am on Oct 18 at Level 10, Bangunan Getah Asli, 148, Jalan Ampang, here - the official address of the Malaysian Strategic Research Centre, of which he is the head.
More...The Star