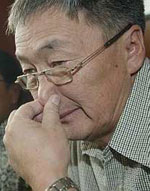 Dad refuses to accept remains - Dad still hopeful
The family of Mongolian model Altantuya Shaariibuu believes that she is still alive and is fervently praying for her safe return. Her father Dr Shaariibuu Setev, 56, who arrived in Petaling Jaya on Thursday with a blood sample of his wife, refused to accept or believe that the skeletal fragments recovered at Puncak Alam in Shah Alam could be that of his missing daughter.

He also said that the woman in the photographs from the Internet, showing a striking resemblance to his daughter and which were published in newspapers yesterday, was not Altantuya. Read article...The Star
Posted by HappySurfer at 11:12 PM