Of Barbie Dolls and Others

Last weekend, I gave in to an urge to do some gallivanting, so decided to visit One Utama in Damansara. "One U" for short, is one of Kuala Lumpur's many shopping malls. The anchor tenants here are Jaya Jusco (Aeon) and Parkson. It was my first visit since they added the new wing to the complex and since IKEA moved out.

Being the weekend, there were a number of product promotions in the concourse areas. First up, saw lots of people lining up at the balcony on every floor. On looking down, realised it was a Barbie promotion. The show started off with a number of dance schools performing. I was on the second floor so just managed to get a few faraway non-sharp shots - sorry. Here is one. Looks like there were more adults than children. Did you know that Barbie first made its appearance on March 9, 1959? Also, Mattel, the toy producer, estimates that there are well over 100,000 avid Barbie collectors. Ninety percent are women, at an average age of 40, purchasing more than 20 Barbie dolls each year. 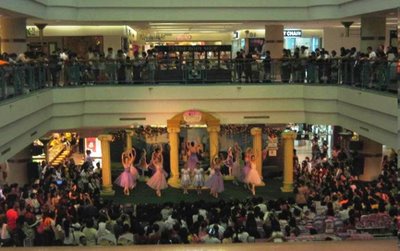 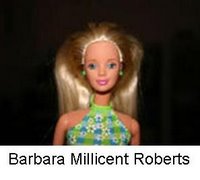 There was also an OSIM promo. The products promoted were in the form of massage chairs and the like. It drew a good crowd trying out their massage chairs. (Another dark aerial shot.) 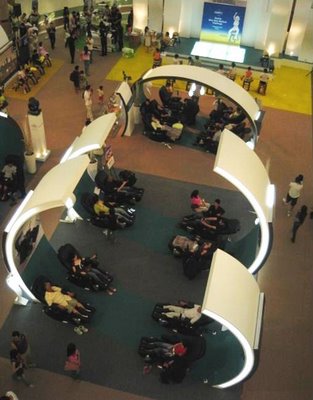 BMW and Mercedes Benz were also strutting their stuff. I have no pictures for this one. There were too many sales personnel around so I was rather embarrassed to take any shots. Lots of people milling about the show-units too.

Going through the annexe that joins the old wing to the new, I saw this mural on the wall. It is a mural of tiles and mosaics, whose artwork was contributed by children in the "Green Friends" project - something to do with the environment. Look at the painted tiles up-close. They are very pretty and meaningful and some have the artist's name and age on them too. 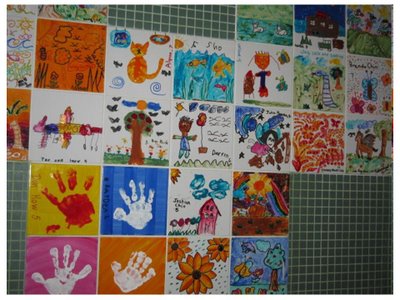 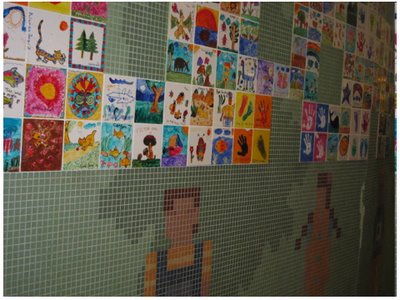 The external facade of some of the shops caught my attention. I noticed just one outlet with a Christmas display. Surprising. Surely there should be more decorations by now. I like this huge display of Nicole Kidman for Chanel No. 5. Made me wonder (again) what that couch-jumper was thinking. 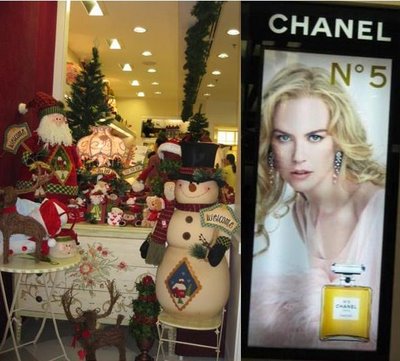 I like this one too - GUESS. Big is beautiful, I guess. 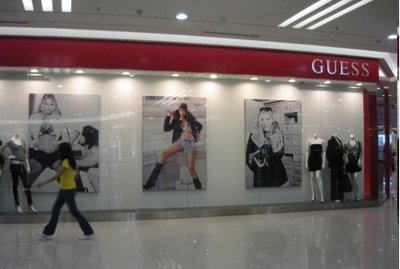 And this one, an airy and pleasing-to-the-eye outlet - the clever use of glass. Nice. 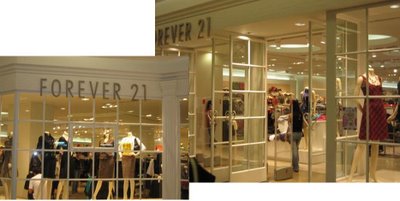 What about this? An eye-catching nook. I did not check out what it was though. Notice it says PLAYBOY on top? There were colourfully-painted footprints on a floor of black leading up to the stairs. Anyone knows what this place is? A club? A boutique? I remember seeing a clothes outlet directly one floor up. Perhaps the staircase leads to that outlet above? 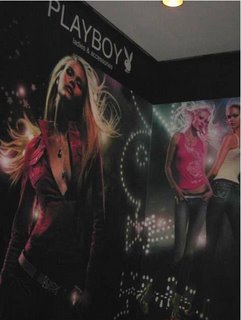 I also took pictures of some food outlets but they did not turn out well. One was of a Japanese restaurant illuminated inside by lots of longish red lanterns. The decor looked nice and cosy. Another fascinating outlet is one that sells Chinese herbal drinks. What was fascinating about that place are the huge urns and a gigantic teapot or cauldron-like container holding the herbal drinks.

It was fun, playing tourist, but all too soon, it was time for home. I must say, that was a good trigger-happy outing.
Posted by HappySurfer at 2:33 PM