The frontpage of major dailies today is once again being hogged by the Altantuya murder case but this time the focus is on Razak Baginda being released on bond. Well, what do you know!

KUALA LUMPUR: Abdul Razak Baginda was released on a RM1mil court bond after he claimed trial to a charge of abetting in the murder of Mongolian beauty Altantuya Shaariibuu.

The 46-year-old political analyst was allowed to go home yesterday after a High Court here allowed his release under the bond, which was without security, due to his poor health.
More..The Star

And on the frontpage of The New Straits Times: 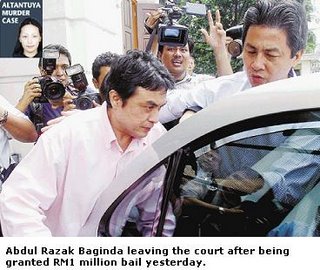 Abdul Razak Baginda, facing a death sentence for allegedly abetting in the murder of Mongolian Altantuya Shaariibuu, was released on a court bond of RM1 million.
More...NST 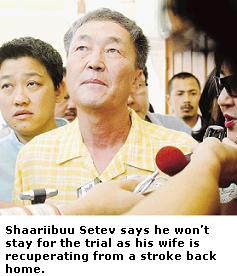 In court today, Shaariibuu Setev praised police for their quick work in solving his daughter’s murder. He was happy with the system.

Clearly not expecting the court decision, the 56-year-old did not hide his frustrations when speaking to reporters outside the courtroom after proceedings.
More...NST
Posted by HappySurfer at 2:45 PM