The photos below were voted by readers as the best images of the past year. Unfortunately, the email does not state the sponsor of this compilation or the source of these wonderful photos. If you do know, please let me know so that due credit can be given.

I hope you will enjoy the photos as much as I did. My favourite is #6, Light of the World. Imagine seeing it first-hand from space.

1. Swallowed whole
A rainbow trout fingerling peers out from the gullet of a northern pike at the Alaska Department of Fish & Game aquarium in Anchorage.

2. A Romp in Russia
A polar bear cub plays near his mother at the Moscow Zoo.

3. Moonshot
Flying at nearly 35,000 feet, a jet passes over the disk of a winter half moon above Boston on Jan. 3. The jet leaves contrails in its wake due to the temperature difference between the hot engine exhaust and the cold air. 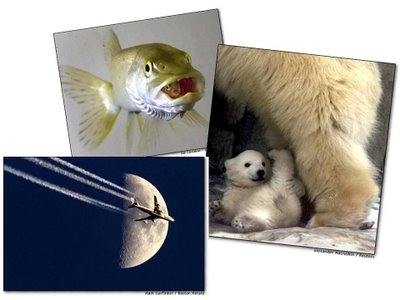 4. Red Square reflection
The Kremlin's Spassky Tower and passers-by are reflected in the wet cobblestones of Moscow's Red Square on Feb. 13.

5. A galaxy's sharp edge
An image produced by the Hubble Space Telescope, released March 1, shows a perfect "edge-on" perspective of the galaxy NGC 4013, with huge clouds of dust and gas extending above the galaxy's main disk.

6. Light of the world
This composite image shows what Earth looks like at night. City lights highlight developed areas of the planet. 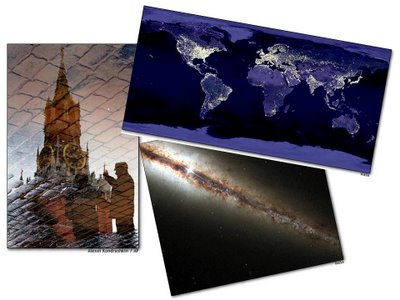 7. Mother and child
An ethnic Albanian refugee from Selce, Macedonia, and her child look through the window of a bus as they arrive in Prizren in Kosovo on March 27, after fleeing the fighting in Macedonia two days earlier.

9. Great white whale
A beluga whale swims in a tank at the Vancouver Aquarium. 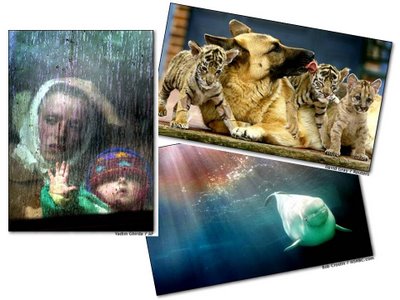 10.Puppy love
Crystal, a year-old black Labrador-Dalmatian mix, peers through a heart-shaped hole in a fence.

11.The gathering storm
Dark clouds roll over Blair, Neb., on May 9, bringing thunder and flashes of lightning 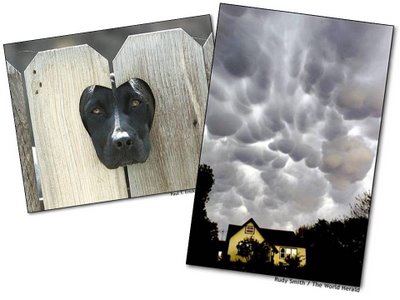 12. The little duckling who could
Mallard ducklings wait their turn May 14 as a sibling struggles to make it up a curb in South Bend, Ind. The mother, who had already cleared the obstacle, flirted with traffic for 20 minutes before leading her offspring safely across the busy road.

13. Mideast flare-up
A Palestinian youth uses a slingshot to fire stones at Israeli soldiers from behind a barricade of burning tires May 23

14. Rainbow times two
An afternoon storm brought a double rainbow over downtown Chillicothe, Ohio, on May 27 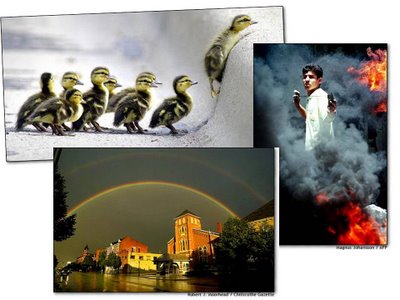 15. Fury from above
Lightning ripples over the Bass Performance Hall in Fort Worth, Texas, on June 14.

16. Grand old night
Tanner Mann, 8, of Hortonville, Wis., gets a good seat on top of his mother's car July 4 for the fireworks show at Riverside Park in New London. 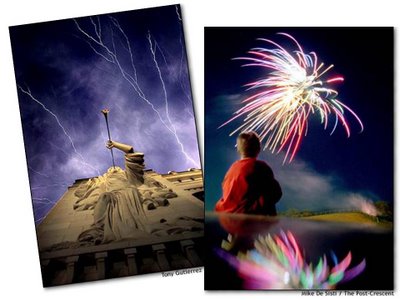 17.Un-bear-able heat
Koluk the polar bear goes headfirst into the pool at the Albuquerque Rio Grande Zoo in Albuquerque, N.M., on July 15.

18. Stellar light show
From ground-based telescopes, the "ant nebula" resembles the head and thorax of a garden ant. 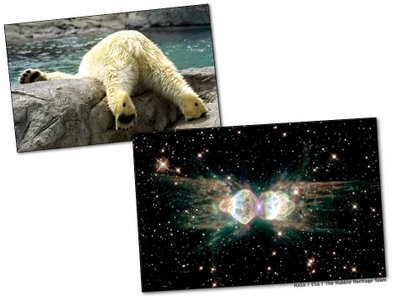 Posted by HappySurfer at 3:19 PM