Oh dear! It was raining cats and dogs just when the torch relay was going on. The relay started from Dataran Merdeka (Independence Square) at 2:00pm and scheduled to reach the Petronas Twin Towers four hours later where it will be celebrated with a grand ceremony.

Time-check: 6:30pm now. It must have been a havoc in the heavy downpour. It's still raining but at a lesser intensity.

Kuala Lumpur is the thirteenth stop of the 2008 worldwide Olympic torch relay outside of the Chinese mainland.

This is the OCM president Tunku Tan Sri Imran Tuanku Ja’afar, who is the first torchbearer in Kuala Lumpur. 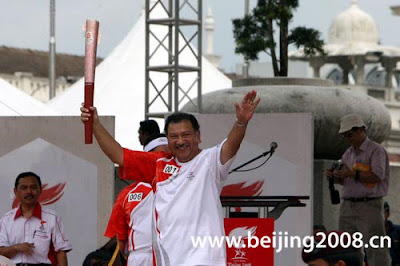 This is the planned route for the torch relay. 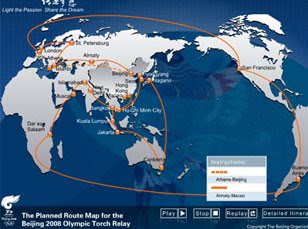