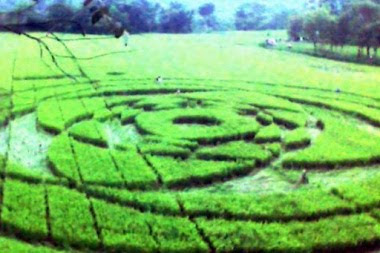 Are crop circles (or also referred to as crop formations as they are not always circular) created by UFOs? The above (courtesy of TheJakartaPost), a large circle formation has been found in a rice field in Krasakan hamlet in Sleman, Yogyakarta, Indonesia, a few days ago.

Though clearly sculptured by humans - it looks like an intricately designed flower - the 70-meter-wide (70-yard-wide) circle has drawn so much attention that police have blocked off the area with yellow tape. Villagers have started charging entrance fees.

Among those turning out offering opinions were officials from Indonesia's space agency, well-respected astronomers and nuclear agency officials. All agree it was not left by a UFO.

From Wikipedia,
While the exact date crop circles began to appear is unknown, the documented cases have substantially increased from the 1970s to current times. Twenty-six countries ended up reporting approximately ten-thousand crop circles, in the last third of the 20th century, and 90% of those were located in southern England. Many of the formations appearing in that area are positioned near ancient monuments, such as Stonehenge. Formations usually are made overnight, but have also been made during the day.

Crop circles have been created as part of art practice as well as for commercial reasons. Crop circle pranksters have also been taken to court for causing damage to crops.

Whatever it is, I think crop circles are beautiful creations much like the crop art of Japan. Here are two crop circles as featured in Wikipedia.

This one was in Switzerland. 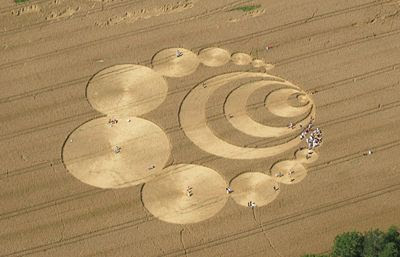 This one is a 780 ft crop circle in the form of a double (six-sided) triskelion composed of 409 circles found in Milk Hill, England. 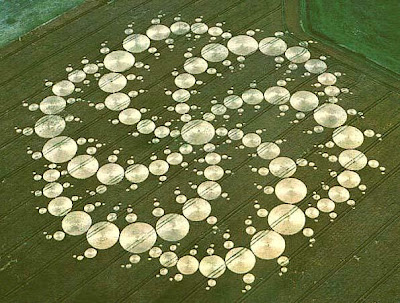