What does the Year of the Rabbit hold for you? 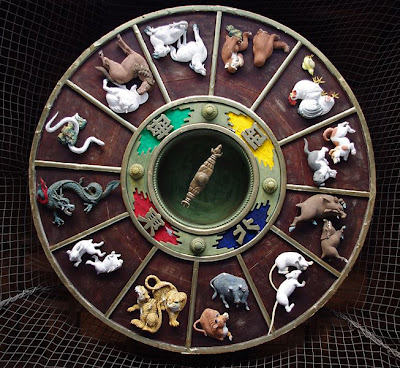 Now that we know when to stop work before and start work after the Chinese New Year and what auspicious colors to wear to attract positive vibes in the new Year of the Metal Rabbit, let's now find out what the new lunar year has in store for each one of us according to the Chinese Horoscope.

The forecast of happenings and behaviors for each animal sign is derived from planetary positions so the forecast is authentic readings and because of its authenticity, there is an increasing number of people looking forward to knowing their horoscope forecast each year. It provides an idea of what to expect or what to watch out for in the coming year in aspects of health, love, finance or overall outlook for the year. In the old days, the Chinese Almanac used to be a must-have item in the home. Today, though it is still the source for yearly Zodiac sign forecast, it is not as popular to the younger generation who has turned to information online.

If you are not sure which Zodiac sign your birthday falls under, here is a Zodiac sign chart for your reference. For a better print, Wikipedia has it which the chart has been borrowed from. The chart covers birthdates between the years 1924 to 2043. 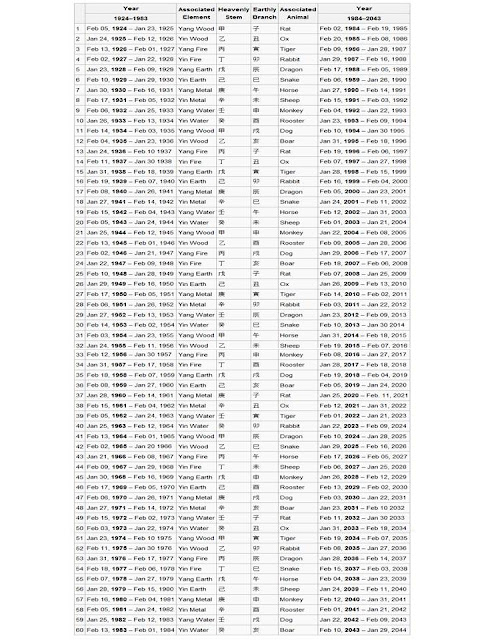 Whether you believe it or not, here is the 2011 Zodiac sign forecast courtesy of freehoroscopesguide.com

Rat Horoscope
The Chinese New Year 2011 will be very good for most of the Rat people. First half of 2011 will bring in new opportunities and increased prospects in work and business. Those at work will get lot of support from their teammates and colleagues. Rat people have lot of new ideas to implement. The first thing you should do is discuss with your senior. Rat Chinese Horoscope 2011 says that there will be times when excess of work can take a toll on you. You need to remain calm and go on with the work.
More..

Ox Horoscope
At work, Ox people need to be away from any kind of office politics and arguments. Ox Chinese horoscope 2011 says that this is an important year for your career prospects. Engaging in anything but your work may impact your growth prospects. Money wise, the Chinese New Year will be good for most of the Ox people.
More..

Tiger Horoscope
These people will be loaded with lots of work this year. Tiger Chinese horoscope 2011 sees these people getting frustrated at times. You need to be calm while at work. The first half of 2011 will be testing your patience. Second half however might be a bit better with pressure easing on Tiger people.
More..

Rabbit Horoscope
Among all the aspects of your life, money and love will rule the year. People born with rabbit zodiac sign are sure to get loads of money in their pockets. They will however leave no stone unturned to spend it on all the luxuries of life. Rabbit people will be spending good amount of money on their home.
More..

Dragon Horoscope
The Chinese New year 2011 will be a satisfactory year for most of the Dragon people. Those at work will enjoy a smooth life at office. There will not be much of ups and downs in professional life. Dragon Chinese horoscope 2011 forecasts a healthy business life for these people. You just need to be aware of happenings around you and keep a track of your partner’s moves. The jin jui star will shower good luck and love on most of the Dragon people.
More..

Snake Horoscope
As far as the Chinese New Year 2011 is concerned, these people will live a smooth life in the year. The year will start with a very good note with your family getting some good news in the first quarter of the year 2011. Snake Chinese horoscope 2011 tells that these people will get unmatched support from their relatives and friends.
More..

Horse Horoscope
The Chinese New year 2011 will be an important year for many Horse people. They will experience sea changes in their lives during this year. Most of the Horse people will have to face tough time at work and in business. Horse 2011 horoscope suggests these people to do some introspection on the changes that they need to inculcate in their lives and in their nature. At work, Horse people will be used by their own team mates and colleagues to get over and gain a promotion.
More..

Sheep Horoscope
The first half of 2011 might not be very good for Sheep people. Those at work can face difficult times owing to their lack of interest and lack of result focus. You will have to be very careful while talking to your seniors. Sheep Chinese horoscope 2011 also advises you to be away from any wrong happenings at work or you might be dragged into problems by your own colleagues.
More..

Monkey Horoscope
The Monkey Chinese horoscope 2011 foresees a smooth year for most of them. At work, Monkey people will excel in all aspects. The presence of Yi Ma star shall help Monkeys get the good news going in form of promotions at work, profitability in business.
More..

Rooster Horoscope
The Chinese New Year 2011 will mark the starting of a new relationship for Rooster people. Those looking out for proposing someone special should not waste much of their time and ask her right away.
More..

Dog Horoscope
The Chinese new year 2011 will be a year full of great opportunities. Dog people will get good opportunities during the first half of 2011. On professional front, Dog people have high chances of getting a good promotion and bonus. Those looking for a job change will be successful in getting into new position during third quarter of 2011. Dog 2011 horoscope foresees strengthening of relationships too during this year. Be it with friends or with relatives, Dog people will make every effort to clear things out with them.
More..

Pig Horoscope
People with pig zodiac sign have to work hard to achieve things. This Chinese New Year 2011 will be no different. Though there are chances of a rise in your career, you need to work hard and show your performance to your superiors. Pig 2011 horoscope tells you that it is not only the hard work that one does but the ability to showcase it that also matters.
More..

Let me take this opportunity to wish you and your family a happy, healthy and prosperous Chinese New Year of the Rabbit.