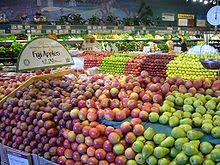 Read this in The Star..

A local Chinese paper, Nanyang Siang Pau, reported that some apple traders in Beijing pour earth into the inner layer of boxes to create more weight to fetch a higher price.

Each box with mud could weigh between 1.5kg and 4kg.

A wholesaler, identified as Lee, told a reporter they started selling apples in mud-insulated boxes since October last year.

A normal (cardboard) box would weigh just over 1kg with a consumer price of 5 yuan (RM2.30).

Due to the thickness of the box, there would be fewer apples.

Asked if he was worried that consumers would come back and confront him after opening the boxes, Lee said: “Those who buy will not eat, those who eat will not buy. That’s why the mud boxes continue to exist.”

Explaining his rationale, he said most people bought the apples to give away as gifts.

While we are at it, we might as well learn something about apples. The proverb "An apple a day keeps the doctor away." does hold some truth. According to Wikipedia, research suggests that apples may reduce the risk of colon cancer, prostate cancer and lung cancer. Compared to many other fruits and vegetables, apples contain relatively low amounts of vitamin C, but are a rich source of other antioxidant compounds. The fiber content, while less than in most other fruits, helps regulate bowel movements and may thus reduce the risk of colon cancer. They may also help with heart disease, weight loss, and controlling cholesterol. The fiber contained in apples reduces cholesterol by preventing re-absorption, and (like most fruits and vegetables) they are bulky for their caloric content. 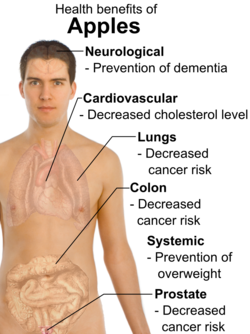 Image source: Wikipedia
Posted by HappySurfer at 11:55 AM