Truth about Coca-Cola and Pork 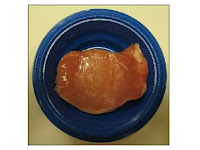 Remember the video on what happens when Coca-Cola is poured onto a raw piece of pork and worms come squirming out of the meat? Convincing little show, wasn't it? How many of you believed that?

I didn't believe that and didn't watch that video (sure don't want that scene to be imprinted in my permanent memory) and continue to enjoy pork.

I personally know people who saw that video and have stopped eating pork since. Here is the real deal..

According to Snopes, the unbiased urban legend debunking site, the claim that pouring Coca-Cola onto a raw piece of pork will cause worms to come crawling out of the meat is ... *drumroll*.....FALSE.

The less-than-fantastic reality is that pork products made from domestically-raised animals and sold on the consumer market are pretty reliably free of worms, and pouring Coca-Cola over a slab of raw pork won't get you much other than perhaps a nicely marinated piece of meat. More on Snopes.

There you go! The truth. Now, go spread the right word.. (Poor porky..)
Posted by HappySurfer at 1:39 PM