"Bring Your Daughter and Son to Work" Day 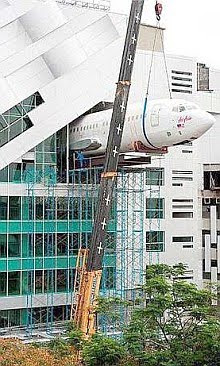 In the west, some corporations have a program that involves giving children of employees a chance to see what their parent(s) do at work. They call it 'Bring your daughter/son to work' Day.

Malaysian parents who work in the airline industry will soon have a chance to let their children experience their nature of work.

KIDZANIA Kuala Lumpur recently unveiled its first outlet fixture in the form of an AirAsia fuselage as part of its airport terminal facade.

The fuselage taken from an actual Boeing 737-300 aircraft will eventually be fitted out to house realistic flight simulators that will allow children to “pilot” an airplane.

AirAsia check-in counters will also be set up at the main entrance of KidZania, which will see children checking in to receive boarding passes to enter.

The 80,000 sq ft indoor educational theme park at the Curve NX is accessible via a bridge connected to The Curve shopping mall. It is expected to open to the public in the fourth quarter of this year. Parents may want to take note.

Besides being a part of an airline crew, children can also role -play as a bank customer, taking a driving course, being a journalist for a day as well as hosting and supporting a tv programme production.


Source: The Star..Where kids can be pilots and cabin crew
Posted by HappySurfer at 1:45 PM