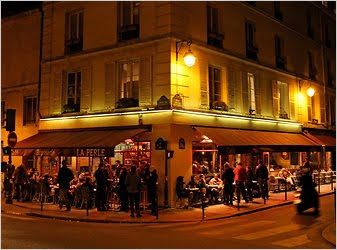 If you live in the Klang Valley or have been to this part of the world, wouldn't you say the scene above could pass for one of our chain cafes that have been sprouting all over town the last few years? Or it could be a painting of a cafe scene by Vincent van Gogh (ala The Café Terrace on the Place du Forum, Arles, at Night)?

Actually, this is the now-famous cafe where John Galliano supposedly made anti-Semitic remarks. John Galliano, a British fashion designer, is head designer at Christian Dior, i.e., until his removal following this episode. Troubled by the actions of its star designer, Christian Dior acted to limit the damage. Mr. Galliano, 50, is a one-time punk stylist whose soaring imagination helped turn Dior into a multimillion-dollar brand. So far, no charges have been filed against him.

The British fashion designer John Galliano in Paris in July 2010 at the end of the presentation of his Fall-Winter 2010-2011Haute Couture collection for Christian Dior. 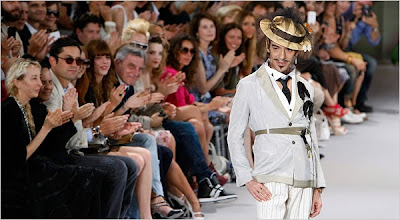 Source: NY Times
Posted by HappySurfer at 10:23 AM