Three years ago today, Malaysians went to the polls and the rest as they say is history, which includes five states crossing over to the Opposition. Let's take a little peek through the time-tunnel to three years ago to a Reuters report: 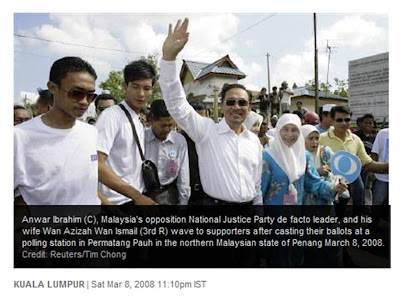 Politics is never a nice subject to broach on, is it? So let's just leave it at that and move on to something more positive, more pleasant, if you will.

If it's your birthday today, and I know one special person is celebrating it on this date, let me wish you


Happy Birthday!
May each day of the year be filled
..with joy and love, blue skies..
and all things
nice..
Posted by HappySurfer at 12:28 PM

Email ThisBlogThis!Share to TwitterShare to FacebookShare to Pinterest
Labels: Birthdays