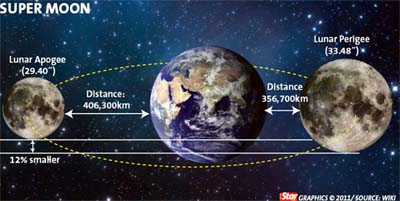 Today is not the fullmoon however. Full moon this month falls on this Saturday, March 19. Unlike other full moons, this one of the second lunar month will come closest to Earth and thus termed Supermoon.

This Saturday, the moon will swing around Earth more closely than it has in the past 18 years, lighting up the night sky from just 356,577km away. The full moon will appear bigger and brighter.

For astonomers and people who enjoy watching the sky, Saturn will also be visible to the naked eye on that night. What is rare is that there will also be a planetary alignment on that day. Of course, it does not mean that all the planets will be in a straight line.

“Mercury, Venus, Mars, Jupiter, Uranus and Neptune will be very close to the sun within a 50° angle and this qualifies as a planetary alignment – it’s impossible for all the planets to be in a straight line”, according to Universiti Sains Malaysia’s (USM) Astronomy Club academic adviser Assoc Prof Dr Chong Hon Yew.

Notes on this video from the source: Ides of March is when Julius Caesar was assassinated ("E tu, Brute?") and to commemorate this notorious event in the history of our great city, Rome H3 organizes a celebration weekend every year in mid-March: The weekend starts with a Friday Night Pub Crawl in downtown Rome to get us in the mood... On Saturday we run somewhere in the scenic surroundings of Rome through ancient ruins (you wish), beautiful landscape , some shiggy, and backyards of mad Italian landlords. Saturday night dinner in a local Italian restaurant with traditional Roman food (pasta, that is..) and copious amounts of nectar of the Gods wine, that is). Sunday morning is the time for the the Toga Run that gives you the unique chance to run through the world famous sights like Colosseum, Circus Maximus, Forum Romanum, Pantheon, Fontana di Trevi and Spanish Steps posing in a state-of-the-art toga !

And if you are interested, here's how to drape a Roman toga..


Sources:
- The Star..Earth’s satellite to appear larger and brighter on Saturday
- Wikipedia - Ides of March
Posted by HappySurfer at 11:15 AM