And Then There are Two - American Idol Finalists 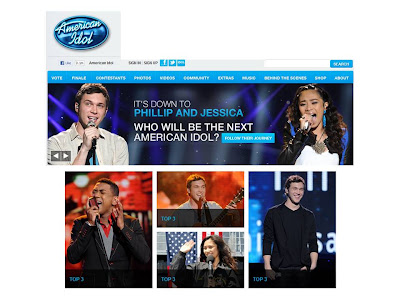 The time has come!
Tuesday night (US time) will see the last two finalists perform in the bid for the Winner of the American Idol Season 11. The two finalists are 16-year-old with a big voice, Jessica Sanchez, and 21-year-old singer-songwriter Phillip Phillips, the latter whom Jimmy Iovine, the show's mentor said, "He has a certain thing that some of the other (recent Idol winners) didn't have. I don't know how he was missed in the industry because he has such charisma and such a great character."

And on Wednesday (again US time, 8am Malaysia time Thursday) watch a 2-hour Finale of the crowning of the new American Idol Season 11 - all on StarWorld, Ch 11 on Astro.

If Sanchez wins, she will be youngest Idol champion and the Fox TV contest's first female winner since Jordin Sparks in 2007. The home-schooled teen was saved from elimination by the show's judges last month after coming bottom in the public vote.

Hear Jessica Sanchez perform "I Don't Want To Miss A Thing" by Aerosmith at the Top 3 performance show.


Joshua Ledet performs "No More Drama" by Mary J. Blige at the Top 3 performance show. Joshua was voted out.


You can check out full performances with judges' commentary at http://www.americanidol.com

Who are you rooting for to win the American Idol Season 11? Better yet, vote for your favorite singer to be crowned the new American Idol.

Source: The Star..Jessica Sanchez has to connect to win 'Idol', says Iovine
Posted by HappySurfer at 4:03 AM