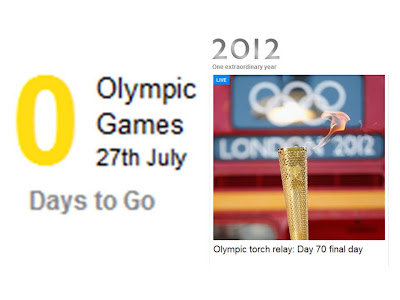 Indeed! Today is the day! The day sports fans around the world have been looking forward to - the 2012 Summer Olympics or commonly known as London 2012.

The most happening place in the world right now in the context of sports has got to be London, the venue of the 2012 Summer Olympics.

While a girlfriend is smack in the middle of all that London Olympics action, (she lives there and even has tickets to some of the games!), some of us (meaning me) are happy enough just getting news from afar.

BBC is doing a great job (as always) of keeping the world updated on the activities leading up to the actual Summer Games.

After seven years of preparation, the Opening Ceremony of the London Olympics is due to take place later at 4pm London time which is roughly about 10pm Malaysia time.

The three-hour spectacle in the Olympic Stadium is expected to be viewed by a global TV audience of a billion people.

The image below shows the Olympic flame heading along the Thames on the Queen's rowbarge Gloriana on the final day of the torch relay. 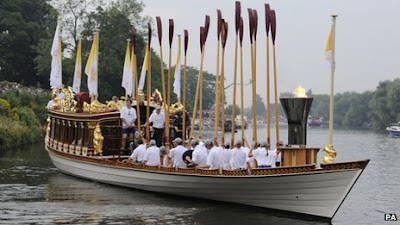 The final torchbearer of the 70-day relay will be 22-year-old basketball player Amber Charles, who played a key role in London's winning bid and who will carry the flame in front of City Hall and Tower Bridge.

The relay ends late in the evening with the lighting of the cauldron during the opening ceremony but the identity of the person who will take on the honour remains a mystery. Will it be David Beckham doing the honours?

You can get more news of the London Olympics at the BBC website.


Official Olympic Channel by the IOC

NBC channel - only available in the United States and U.S. Territories

In Malaysia, Astro ESPN Channel 812 will be screening it live.

Posted by HappySurfer at 5:08 PM