If you don't fancy crowds or being caught in a traffic congestion (of both vehicular and human kind), KL city is where you would want to avoid today, Saturday. Why?

Today is the day of yet another people's rally from 2 to 5pm to be held at Merdeka Stadium. Police approval has been granted for a peaceful rally and they (the police) are making good on their promise of ensuring a peaceful Himpunan Kebangkitan Rakyat rally by not deploying the Federal Reserved Unit (FRU) personnel or conducting roadblocks and road closures in the city.

The organisers of Himpunan Kebangkitan Rakyat have pledged to ensure that their rally at Stadium Merdeka will be a peaceful one. 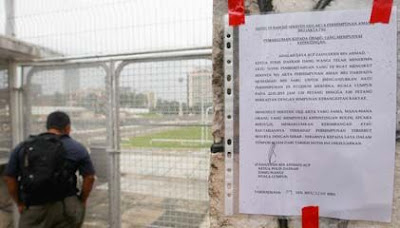 A notice outside Stadium Merdeka stating that the rally had been given the police go-ahead and City police chief DCP Datuk Mohmad Salleh has asked everyone to help ensure a zero-casualty gathering. The Star

Eight routes have been planned for rally supporters to meet at - Amcorp Mall in Petaling Jaya; Masjid Arrahman in UM; Brickfields; KLCC; Kelab Sultan Sulaiman; Pasar Seni; Jalan Sultan and Masjid Negara - and from these meeting points, supporters will march on to Stadium Merdeka just like marching on to watch a football game at the stadium. Stadium Merdeka is right in the middle of the city in the vicinity of Chinatown. A map below for your reference.

Rally organisers target a turnout of one million people at the rally which is expected to be coloured by the BERSIH's signature yellow, the anti-Lynas' flourescent green, the Pakatan Rakyat women's purple and so forth. 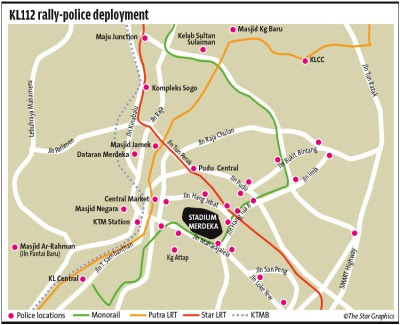 However, should you decide to be there, for your own safety, you may want to take note of the do's and dont's for this KL112 rally or for future rallies for that matter. I hope you read Bahasa Malaysia because the list is in BM. If you have been to previous rallies, the list could serve as a reminder to be adequately equipped.