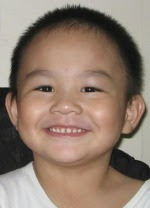 No family should have to go through the pain of death of such a young family member. William Yau Zhen Zhong was only six years old.

William went missing on Jan 16. His body was found nine days later floating in the Klang River at Sungei Sireh jetty. The severity of decomposition of the body did not enable immediate identification. DNA tests matching the boy's with his parents through samples of his parents' hair and bones resulted in positive identification that it is indeed William. However earlier, the yellow t-shirt and the shorts on the body had the parents confirmed that it was their little boy.

Yesterday, William's body was released from the hospital to their parents. His father, Yau Kok Kang and mother, Goh Ying Ying, arrived at the mortuary at 10.20am to collect their son's body.

To perform prayers, William's mother was seen clutching a joss stick while his father held an effigy made from paper in the shape of a little boy. It is a ritual performed so that William's spirit would go along with the body as the body would be brought back to Malacca for funerary rites and cremation. 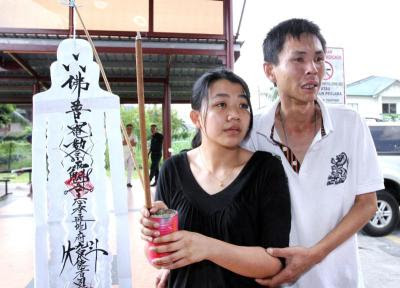 William's body was cremated yesterday itself. It was an emotionally-charged memorial service for William. The boy's grandmother, Chee Chau Moy, wailed and pleaded to be allowed to hug her grandson one last time. The Star reported that:

Chee, 68, had arrived at the Melaka Memorial Park crematorium at the Jelutong Chinese cemetery in Batu Berendam just as the coffin bearing the remains of the boy was being put into the incinerator.

“Why has no one told me about your funeral? Why was Ah Poh, who took care of you, not told?” she asked.

She did not stop crying out William's name despite attempts by Malacca Chief Minister, Datuk Seri Mohd Ali Rustam, to console her.

“My heart is bleeding. It's supposed to be me, not him (in the coffin). Why did God take him away?” she cried to Mohd Ali.

She was then allowed to see her grandson's burning casket.


Earlier on, William Yau's parents conducted prayers at jetty to appease his spirit. They spent an hour there at the Sungai Sireh jetty near Port Klang where the body was found. They were shown around the location where fishermen Yusof Osman, 53, and Satarudin Kamal, 45, made the find. William's parents thanked both the gentlemen for finding their son's body and handed them a token cash contribution.

The couple has two other children, a boy aged seven and a one-year-old girl. 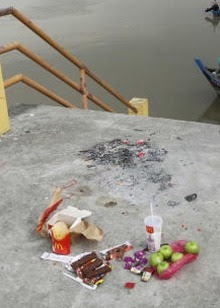 Meanwhile, Police have formed a task force to investigate the disappearance and death of six-year-old William Yau Zhen Zhong.

Allegations of abuse has been rubbished by William's grieving mum. Goh hoped the public could give them some privacy to mourn their loss, adding that they were considering holding a press conference to clear the air.

It was reported that Goh did not rule out taking legal action against those responsible for the allegations.

A RM60,000 reward has been offered for information leading to the arrest of William Yau Zhen Zhong's killer(s).

MCA Complaints and Public Services Department head Datuk Seri Michael Chong said the reward was contributed by several parties to encourage the public to come forward with any information on what happened to the six-year-old who had gone missing on Jan 16 and was found dead a week later.

“We don't know for sure if William was murdered. But if he was, we want to make sure the culprit is brought to justice.


We will miss you, William Yau. We will remember you. Rest in peace!


William's body was cremated
(All images from The Star)
Related article: - Police wrap up investigations into William’s death
Posted by HappySurfer at 1:33 PM