With Chinese New Year fast approaching, it is the time again for getting new notes from the bank for the 'angpow', the money that goes into the red envelope during Chinese New Year.

I was at the bank early last week and overheard a bank customer being told by a bank teller that new notes were still not available.

I wonder if new notes would mean the new set of currency notes that were issued for circulation last year.

The new notes are in more vibrant shades. In the image below, they are the orange RM20, the red RM10 and the green RM5 next to it, and the blue RM1, the second piece from the right. The last three on the left extreme are RM50 notes which are also part of the new issue and have been in use earlier. 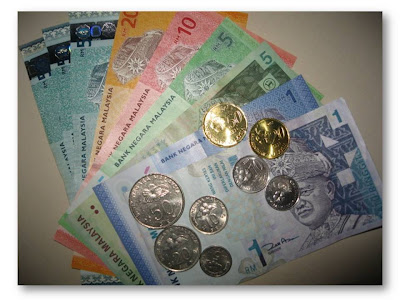 The coins on the left are the old coins/last issue though still in circulation. There is no deadline yet for old currency to be discontinued.

When the last issue of currency is taken off circulation, the notes and coins would become hot items on the numismatic market. Collectors will be heading to places like the flea market at Amcorp Mall, for instance, hunting for these priced items.

Amcorp Mall is not just a place for Malaysian coins, you can also find foreign coins here as well as silver coins if you are looking for any to add to your collection.

Posted by HappySurfer at 3:03 PM