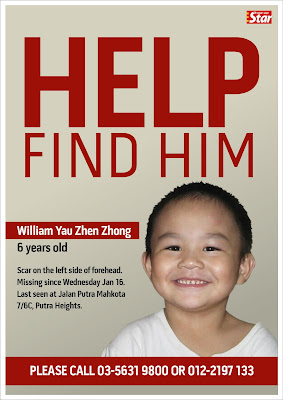 While Malaysians are helping to find William Yau Zhen Zhong since he went missing last Wednesday, The Star reported yesterday that a severely decomposed body of a boy 6- or 7-year-old has been found floating in a river near the jetty of Sungai Sireh, near the Sri Perantau flats at about 6.30pm on Thursday.

The boy was in a yellow t-shirt and shorts and has fair skin. The T-shirt had the words 'Active Group' in white and 'Best Team' in blue on it.

When asked whether the body could be that of missing boy William Yau Zhen Zhong, South Klang OCPD Asst Comm Mohamad Mat Yusop urged the public not to speculate until post-mortem and DNA tests, scheduled for Friday morning, were completed.

“There have been no cases of missing children reported in the area recently,” he said.


UPDATE:
The Star reported that

The parents of William Yau Zhen Zhong, the six-year old boy who went missing on Jan 16, arrived at the Tengku Ampuan Rahimah Hospital in Klang around 11am Friday.

They're expected to give samples for DNA testing to help determine the identity of the body found near the Sungai Sireh jetty Thursday evening, and were seen being escorted into the hospital's morgue.
More..William Yau's parents arrive at Klang hospital 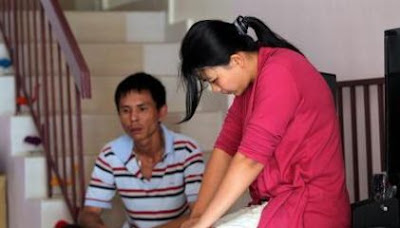 The post mortem has been completed and a forensic team from Bukit Aman was seen leaving the Tengku Ampuan Rahimah Hospital morgue around 1.30pm. The final DNA test result will take a few days.

The parents of William Yau Zhen Zhong, who went missing on Jan 16, were escorted out by police around 1.40pm. They left without talking to press and his mother was seen sobbing. 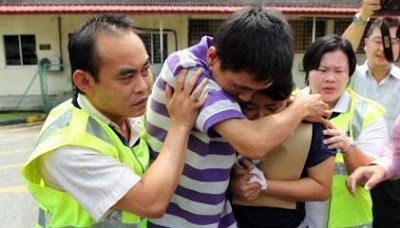