The football match yesterday between Tottenham Hotspurs and Manchester United was played with snow falling and temperature was at -5deg according to the commentator. Surprised that match carried on despite. Both teams earned a point each the match being a 1-1 draw with Dempsey of Spurs putting in the equalizer in the last minute of injury time. Ouch for MU!

All across Europe heavy snowfall is causing traffic chaos. 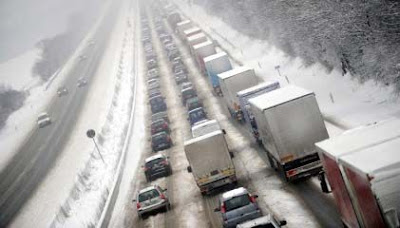 Air, road and rail traffic across much of Europe suffered major disruptions on Monday as heavy snow and freezing weather gripped the continent.

The problems at airports were particularly severe, with flights scrapped at Europe's busiest three hubs.