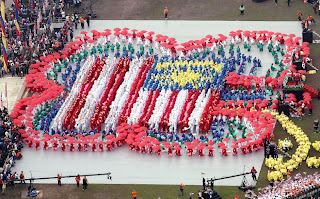 Malaysia celebrates National Day today, August 31. This is our 56th anniversary having achieved independence from United Kingdom in 1957. Independence Day is a more appropriate term as it was on this date 56 years ago that Malaya became independent. Malaysia did not come about until in 1963, September 16 to be exact when Malaya, Singapore, Sabah and Sarawak came together to form the new Federation of Malaysia. In 1965, Singapore left to form the Republic of Singapore.

This year, the Independence Day parade is officially held in Kuala Lumpur. Crowds, local and tourists alike, converge on Dataran Merdeka to watch the morning parade.  There is also a live telecast for those who prefer to watch the parade at home.

This year's Merdeka theme is "Malaysiaku berdaulat: Tanah tumpahnya darahku" which translates to English as "My sovereign Malaysia: My native land".

The theme calls for Malaysians to be united in defending the sovereignty of our beloved country. In line with the theme, this year's parade will showcase the assets of the country to defend the country as opposed to floats of former years that featured cultural aspects of the country. 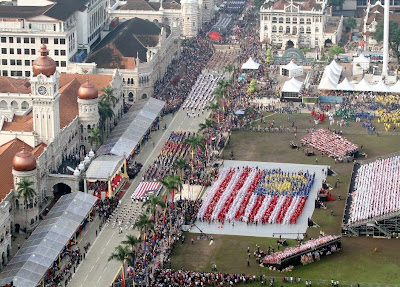 The king and queen, Prime Minister Datuk Seri Najib Razak, his deputy Tan Sri Muhyiddin Yassin and other cabinet ministers, as well as VVIPs and their wives will be on a special stage to witness the parade. The picture above shows where the main stage is which is right in front of the Abdul Samad Building.  The field on the right is Dataran Merdeka or Merdeka Square which has one of the tallest flagpoles in the world at 95-meter tall.  You can see part of the flagpole on the top-right corner of the picture (above). 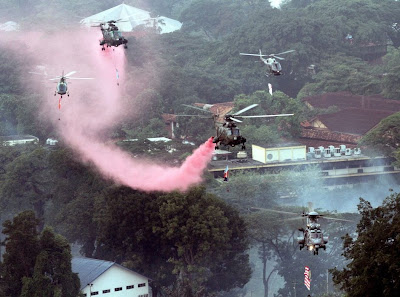 More pictures available in The Star.

A video to watch of the Merdeka Day parade..

Posted by HappySurfer at 8:28 AM