The Star reported that

Twenty-six people have been confirmed dead so far after a bus carrying 49 people plunged into a 30m ravine near Genting Highlands around 3pm this afternoon.

According to Fire and Rescue Department deputy director-general Datuk Soiman Jahid, 41 have been pulled out of the bus.

Those dead included the driver of the bus.

It is believed that the bus driver had lost control of the bus, which then rammed a divider before plunging down the gorge.

The bus carrying 49 passengers was coming down from Genting Highlands and heading towards Kuala Lumpur. 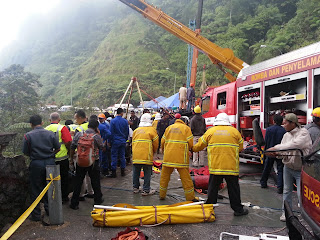 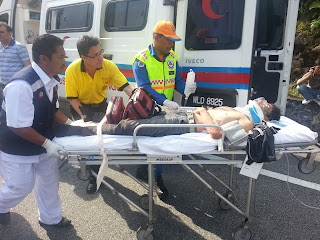 
Incidentally, today is the 15th day of the 7th lunar month.


UPDATE:
53 passengers were on board the bus of which 37 were killed and 16 injured.

Following is the list of survivors who identities have been established so far:

Updated Survivor list as of Aug 23 from The Star..

Updated Deceased list as of Aug 23 from The Star..

Posted by HappySurfer at 8:20 PM