Tonight is the night! It's Linkin Park I'm talking about which I'm into their music too but, I guess, not fan enough to brave the crowd by going to the concert. 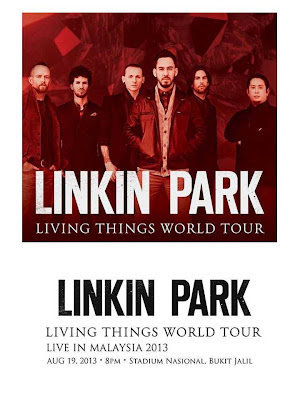 After nearly a decade of anticipation, LINKIN PARK returns to Malaysia to kick off their Living Things

World Tour on August 19th at Stadium National, Bukit Jalil at 8:00pm which is tonight.

A friend, a true fan of Linkin Park, bought tickets way ahead to secure good seats to tonight's much-anticipated concert. He'll be at The Pit, the Yellow Zone behind the VIP Zone, tonight at the Bukit Jalil National Stadium. You can refer to the Seat Plan below. The last concert was held at Merdeka Stadium, the one downtown near Chinatown and this friend said he bought a number of Linkin Park t-shirts at the venue.  I wonder what he'll be going home with this time around. 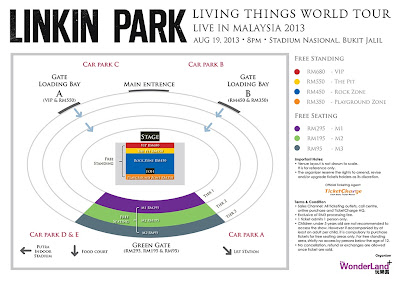 It's raining outside which is a good thing in a way as it's been hot and humid these past few weeks. Plus the rain helps to clear the smog that has snuck back in in some parts of the country, KL being one of the few. For Linkin Park and their fans at the concert, I hope the weather will be kind to them tonight.

For more information, visit ticketcharge.com.my, an online ticketing agent in Malaysia. Images above are from this site.

I wonder if they'll go by this scheduled setlist..


UPDATE:
Linkin Park was worth the wait according to The Star.. 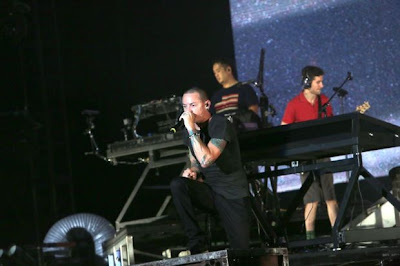 KUALA LUMPUR: When a random person screams at the top of his lungs, it's annoying but when Linkin Park's Chester Bennington does it, it's music to our ears.

Bennington drowned the sound of the crowd at the National Stadium in Bukit Jalil with his powerful vocals as he belted one hit song after another at a concert Monday night.

Bennington and his bandmates - rapper Mike Shinoda, drummer Rob Bourdon, bassist Dave Farrell, guitarist Brad Delson and turntablist Joe Hahn - entertained the crowd with several radio-friendly hits from the earlier days of their careers such as Numb, In The End and Papercut.

The band also included some songs from their latest album Living Things, and got the crowd going from the beginning of the set until the end.