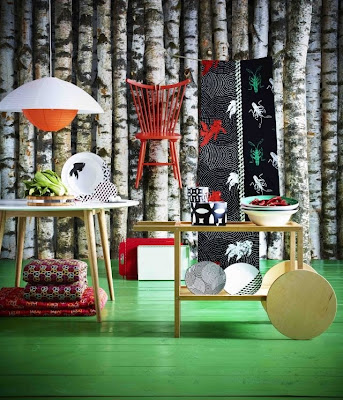 Fans of IKEA will have something to look forward to in September when the largest furniture retailer in the world launches a capsule collection of limited edition furniture and houseware products rolling out starting September 27.

The collection under the name, Trendig 2013, unites Asian cultural influences with the best of Scandinavian design.  This is the first time IKEA launches such a capsule collection of limited edition furniture and houseware products.

The limited edition collection will include crockery, furniture, textiles and table accessories including but not limited to trays and placemats.

By the way, ever wondered what does the name IKEA stand for?

The acronym IKEA is made up of the initials of the founder's name (Ingvar Kamprad) plus those of Elmtaryd, the family farm where he was born, and the nearby village Agunnaryd.

Ingvar Kamprad was only 17 when he founded the company in 1943 in Sweden. He is listed as one of the world's richest people in 2013.

Posted by HappySurfer at 5:50 PM