Today, Google has an interesting interactive Google doodle to celebrate the Seven Sisters Festival, a traditional Chinese festival. The game requires the player to position the flying birds in the respective coloured spots in order for the lovers to meet at the top of the bridge. 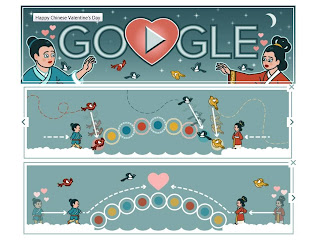 The Seven Sisters Festival falls on the seventh day of the seventh lunar month. Today is the day this year.

Informally known as ‘Chinese Valentine’s Day’ (along with the Spring Lantern Festival) the Seven Sisters Festival has its origins in the two stars Altair and Vega. Chinese legend tells that these shining beauties are actually two lovers – a mortal cowherd and a goddess weaver – who have been cruelly separated on either side of the Milky Way. While the tale has several variations, many say that on this date each year the magpies of the world take pity on the star-crossed pair and form a temporary bridge for them to be united.

The festival is traditionally celebrated with needlework competitions, the burning of incense and young women making offerings to the lovesick goddess weaver and her cowherd beau. But in Hong Kong, some young romantics make additional offerings at Lovers’ Rock on Bowen Road in Wan Chai on Hong Kong Island. - Source: Discoverhongkong.com

Lonely Planet has a version closer to the one I'm familiar with that says:

Qi Xi is the Chinese equivalent of Valentine’s Night. In a tradition that pre-dates Christ (not to mention speed dating), single girls carry out tasks to impress potential lovers. Also called Night of the Skills, the event sees girls showing off their talents at domestic duties such as embroidery and melon carving. They throw a sewing needle into a bowl of water and, if it floats, that indicates the girl is an accomplished knitter.

The festival honours seven fairy sisters who, while swimming, had their clothes stolen by a cheeky cowherd. Sent to ask for their clothes back, the youngest and most beautiful sister had to marry the mortal because he had seen her naked.

When her mother got wind of the unsuitable match, she angrily formed a river in the sky to divide them – the Milky Way. On this night, magpies fly into the heavens and create a bridge to unite the lovers.

Girls make offerings of flowers, food and face powder to the stars representing the couple. When the ceremony is over, in the hope of sharing the seventh sister’s celestial beauty, they throw half the powder on the roof and use the rest.

Local attractions: While the festival takes place throughout China, Hong Kong’s Lovers’ Rock is a pilgrim site for newlyweds and singletons.


I remember an old neighbour aunty used to set up a table with offerings of food, tea, flowers and other stuff relevant to this Seven Sisters Festival. She was the only I know who observed this festival. She was of the Cantonese clan.

Posted by HappySurfer at 5:25 PM