Ugly thing called racism. Happens to the best of us. 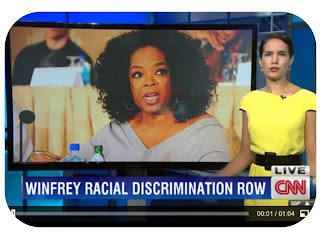 According to CNN, Billionaire U.S. media mogul Oprah Winfrey says she was the victim of racism on a recent trip to Switzerland when a shop assistant refused to show her a handbag because it was "too expensive."

Winfrey was in Zurich for Tina Turner's wedding in late July when she left her hotel alone and popped into an upscale handbag shop.

She went into the shop and asked to see the crocodile skin bag. The shop assistant said, 'No, it's too expensive.'"

Winfrey says she asked again to see the bag -- a $38,000 crocodile skin number by Tom Ford -- and the woman again refused, saying, "No no no, you don't want to see that one, you want to see this one, because that one will cost too much and you will not be able to afford that."

Winfrey says she asked a final time to see the bag: "One more time I tried -- I said, 'But I really do just want to see that one,' and she said, 'I don't want to to hurt your feelings,' and I said, 'Ok thank you so much, you're probably right, I can't afford it and walked out of the store. Now why did she do that?"

Winfrey chose not to identify the shop, but the name of the high-end boutique -- Trois Pomme -- was soon revealed. The shop's manager told CNN the entire incident was a "200 percent misunderstanding" and had nothing to do with racism.

Posted by HappySurfer at 2:30 PM