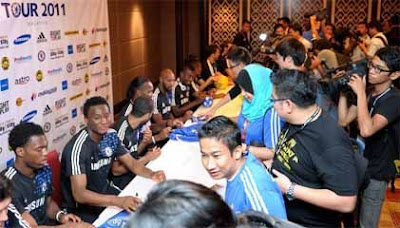 Soccer fans are a lucky lot here in Malaysia. We are fortunate enough to get to watch on television live telecasts of the popular English Premier League (EPL) games. Don't have satellite tv? Not a problem. Almost all mamak tea-stalls by the roadside or in shops/restaurants have this facility and most of them are even open 24/7. These places are where people hang out to watch EPL games at the same time enjoying a meal of roti canai or naan bread with a glass of the popular pulled-tea (teh tarik). Even though there may be satellite tv at home, some fans like to watch the game with other fans, albeit total strangers.

Summer in England means a few of the EPL teams go on an Asian tour circuit. This year, Liverpool FC was here for the first time. They just played their game (to a stadium of roughly 80,000 spectators) last Saturday with a scoreline of 6-3 defeating a Malaysian side that did better than when they played Arsenal earlier. 4-0 is the scoreline for the Arsenal game. Chelsea FC will be playing this evening in which a friend will be watching it at the Bukit Jalil national stadium. I hope the weather stays good seeing that it is overcast right now.

No Manchester United team appearance here this year. They are doing a U.S. tour for a change.

Like I said, Malaysians are lucky to be able to watch these worldclass football teams play, live on television let alone have them bring their game here to Malaysian soil. Fans being fans, they will travel miles to see their favorite team play such as this group of 15 Chelsea die-hard fans from Yangon, Myanmar.

Here, they are seen arriving at the KL International Airport (KLIA). 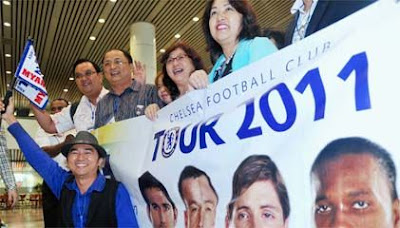 They were here to watch the friendly match between The Blues against the Malaysian Olympic squad at the National Stadium in Bukit Jalil on Thursday. Another group of 32 Blues fans from Myanmar would be arriving tomorrow, to watch the match, the group leader said.


Image source: The Star
Posted by HappySurfer at 11:18 AM