Yellow is a tricky color to wear now

If yellow is your favorite color... 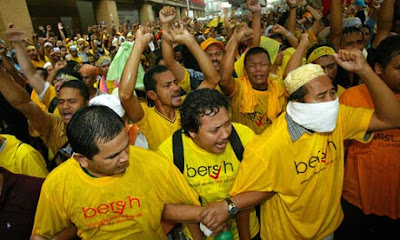 Malaysia Bans Yellow Clothing according to an online news site.

Malaysia Today reports -- the government is cracking down to prevent a July 9th demonstration organized by a group of opposition backed activists -- called Bersih -- Anyone wearing yellow will automatically be identified as a protester.

“Is it a crime to wear yellow T-shirt?”(Malaysia Today)

“The Bersih T-shirt is related to an illegal assembly, then whatever they are wearing is illegal."

And he’s serious -- 14 people have already been arrested in yellow.


Image source: The Guardian. It shows Malaysian activists in Bersih (Clean) T-shirts at a 2007 rally. Photograph: AP
Posted by HappySurfer at 3:25 PM