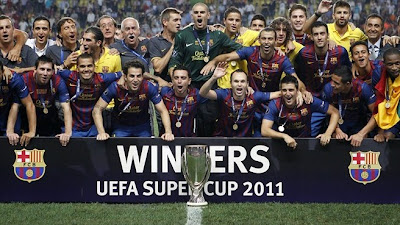 FC Barcelona 2-0 FC Porto
The Spanish champions claimed the trophy for the fourth time thanks to goals from Lionel Messi and Cesc Fàbregas against nine-man Porto.

Lionel Messi and Cesc Fàbregas scored late in either half as FC Barcelona defeated nine-man FC Porto at Stade Louis II to win the UEFA Super Cup for the second time in three editions and a fourth overall.

Fresh from becoming the first recipient of the UEFA Best Player in Europe Award, Messi was the epitome of coolness on a sweltering night in Monaco as he seized upon Fredy Guarín's back pass, jinked his way past Helton and rolled in the 39th-minute opener. More on uefa.com