This is a follow-up post to the earlier post, Preserving Kuala Lumpur Chinatown heritage with a Mural.

Wish I was able to be at Chinatown on Saturday to witness this Jalan Sultan mural in the making. It used to be a sad, dilapidated wall along the Jalan Sultan stretch here. In fact, the site here used to be a funeral parlour for many decades if not a century, which probably accounts for the plot being left alone even after it has stopped operating as one.

The group of 60 artists and well-wishers on Saturday transformed the location into something artistic and bright at the same time playing a part in preserving Chinatown's heritage which dates back to the Yap Ah Loy era of the mid-1800s.

Here is a glimpse of some of the many artworks adorning the wall. These are video-shots picked up from the video below. 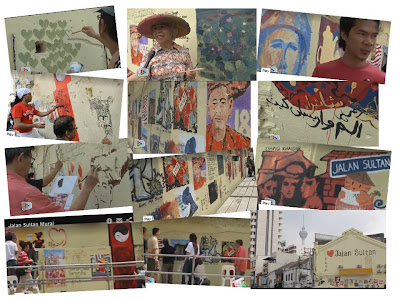 Visitors to yesterday's event also got to go on a heritage walk that took them to historic sites in Chinatown, including the Petaling Street gateway and Lee Lam Thye market.