Monkey on the Job 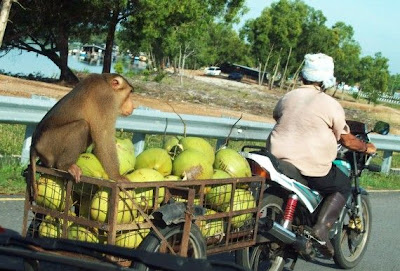 Hey, a monkey, but not on a tree! I find this image interesting so thought I'd borrow this Thumbnail submission by Isa Mohd Zain for a post.

I may be right when I say most of us city-dwellers, even in Malaysia, have not seen a real monkey. Unless you visit the Zoo or maybe a circus that is in town, monkeys are a rare sight let alone the sight of one sitting pretty on a vehicle built-for-two.

Here in Malaysia, those of us who live on the outskirts away from the city or near a forest reserve, will maybe get to see these primates in the neighbourhood. There are lots of monkeys too at Batu Caves.

This monkey here on such a vehicle could be a common sight in small towns where monkeys are still employed (with banana salaries) to pluck coconuts. This image was taken in Terengganu, a north-eastern state on the peninsula.

Green young coconuts (as in the picture) are more for their coconut-drink value while the older (brown) ones are for cooking as in the form of coconut milk (santan) and shredded coconut in curries and other dishes on the domestic front. On a larger scale, coconut products include coconut oil and copra as fodder.

Talking about monkeys, if you remember Shirley, the former “chain-smoking” orang utan, here's good news. Shirley and her three fellow primates are adapting well to their new life at the Matang Wildlife Centre in Kuching. I have been to this centre on my trip to Sarawak some two or three years ago. I was surprised that there is no barricade or whatsoever between the visitors and the primates. Visitors are in the same reserve grounds where the orang utan are except that they (the primates) are on a higher level in the branches or picking up their supply of bananas on a man-made ledge some 15-20 feet above the ground. Not to worry, they never did touch the ground even once. I suppose they are more concerned for their safety thus keeping their distance. We saw five orang utan (literally meaning 'man of the jungle') when we were there otherwise we would have to venture deeper into the reserve to get a glimpse of them.

Okay, enough of monkey-talk.
Posted by HappySurfer at 12:36 PM