Should you cancel your trip to Bangkok?

Latest update: Malaysians have been advised to Postpone non-essential travel to Bangkok due to the flood situation.

The Star's frontpage today reads 'Panic in Bangkok' accompanied by this image.. 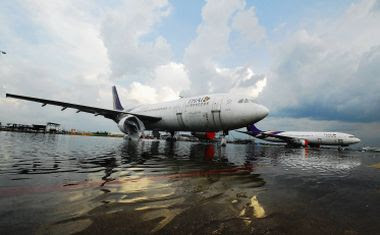 Bangkok's domestic Don Muang airport has been shut down as floodwaters surged into the Thai capital.

A five-day public holiday has been declared from today in preparation for the deluge, also so that people can get to safety.

Emergency rationing has been imposed by some shops to prevent hoarding of supplies. One hypermarket restricted shoppers to one packet of rice and one tray of eggs. Toilet paper was also being rationed.

Now the question. If you have made plans to visit Bangkok with all payments made, should you cancel? Let's hear what the Malaysian Embassy in Bangkok has to say.

The Malaysian Embassy in Bangkok said they are preparing for the worst although the main city centre area appears normal even as floodwaters advance into the Thai capital.

Deputy Chief of Mission Tajul Aman Mohammad said the embassy would provide shelter to Malaysians affected by the flood.

“So far, the situation in Bangkok is still okay. Some areas to the north in the city are flooded, but the main city centre area is normal and roads are passable,” Tajul Aman said in a telephone interview from Bangkok yesterday.

The embassy received many calls and e-mail from Malaysians asking if it was safe to visit Bangkok.

“We do not advise them against coming, as most of the tourist areas are okay. However, for those who come to Bangkok to play golf, we had to tell them that many golf courses located in the north of Bangkok are flooded,” he said.

There you have it, from the Malaysian Embassy in Bangkok.

However, to be fair to Bangkok or rather Thailand, there are also views for proceeding with the visit.

Travelfish says don't cancel. Bangkok is wet but Thailand is open for business and the vast majority of Thailand, especially the south and northeast, is largely unaffected by the floods. Plus the airport is still open. Central Bangkok remains largely unaffected.

Thaizer posts:
In a nutshell, Bangkok airport is open, main tourist attractions are open, hotels are open and life in inner Bangkok goes on as normal. That could change, but that is the situation at this moment in time (16.00 local time October 22). He also says, Don't believe everything you read which Travelfish also said something to that effect.

While from The Times of India: City tourists drop flood-hit Bangkok from travel plans

PUNE: Thailand's worst floods in more than 50 years have made potential tourists from Pune look for destinations other than Bangkok.

City-based travel agencies have registered a spurt of cancellations for trips to Bangkok this week, with some travellers choosing to eliminate the destination entirely from their travel itinerary.

Hope the above is helpful somewhat. The choice to cancel or not is yours, of course. Good luck with your decision.
Posted by HappySurfer at 2:08 PM