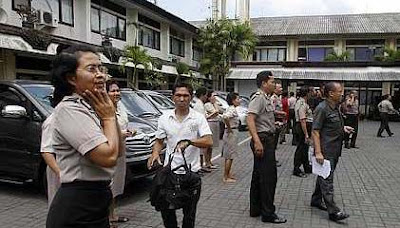 I just read about a 6.2-magnitude earthquake that struck Bali, shaking buildings and sending tourists running out of hotels. There were no immediate reports of any casualties.

A technician just finished changing my printer cartridge when my colleague's email came in about the quake. A funny thought came to mind. Would people also rescue the printer cartridge in an emergency if such an item is a rare commodity? Silly me but then again, it makes sense to save printers ink cartridges if your livelihood depends on them. Wouldn't you agree?

Back to the quake, the epicentre of the quake was about 100 miles (160km) southwest of the island's capital Denpasar, according to the U.S. geological survey.

Endro Tjahjono, head of information at Bali's meteorology agency, said there was no tsunami potential and no reports of aftershocks. Cracks appeared in the walls and glass lobby windows of his office in the southern town of Kuta, and some top floor ceilings fell off, he said.

Indonesia is on the Pacific's "Rim of Fire" and gets regular earthquakes.


Source: The Star
Posted by HappySurfer at 1:45 PM