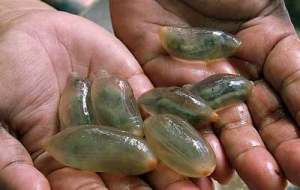 What do you think these are? They are cocoon-shaped organisms mysteriously appearing on the riverbanks in Penang two weeks ago which gave villagers a fright. It was two years ago in December that they observed strange signs such as receding seawater and abundant marine life. Two years ago yesterday, December 26, giant waves wreaked havoc and caused great devastation in countries bordering the Indian Ocean. The villagers named the organism 'ubi air' or 'water potato' in English though they are known as 'bronong'.
More..The Star 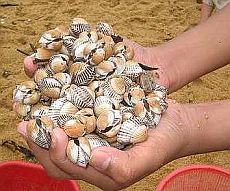 While on the east coast, there is a bountiful supply of cockles. These cockles have been swept ashore by the waves. They are being collected by the sackfuls. Read story.

What could all this mean? An impending disaster? There was no tsunami reported though two major earthquakes struck southern Taiwan on Tuesday, triggering fears of destructive waves as Asia marked the second anniversary of the Indian Ocean tsunami. More..The Star
Posted by HappySurfer at 3:17 PM