One of my favourite foods is the claypot chicken rice. It's a complete meal by itself and is commonly found at food centres though the wait can be as long as fifteen minutes (sometimes longer) as the rice has to be slowly cooked over a charcoal stove.
. 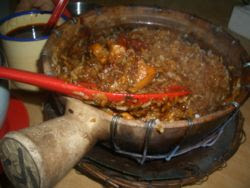 When the rice is almost cooked, marinated chicken chunks, thinly-sliced chinese sausages and dried salted fish (optional but I prefer it included to give the rice the added aroma and saltiness - Yum!) are stirred in during the final stage of cooking. It is then served with a sprinkle of diced scallions (this, I don't fancy) or commonly known here as spring onions. The rice is served in the claypot itself though it's not eaten off it but from a plate provided. Did I say plate? Even though this is a rice dish, hawker stalls normally provide forks and spoons. Chopsticks, however, are provided for noodles.
.
Claypot chicken rice is a typical Chinese dish though it quite resembles the Spanish rice dish of chicken paella. Si?
Picture source: Wikipedia
Posted by HappySurfer at 11:18 AM