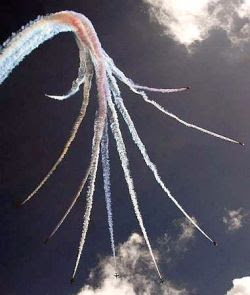 At first glance, I thought it was a beautiful sea creature. No, it's not.

It's the Red Arrows aerobatic team of the British Royal Air Force performing over the skies of Langkawi at the opening of the Langkawi International Maritime and Aerospace (Lima) 2007 Exhibition. The Royal Malaysian Air Force's newly acquired Sukhoi SU30 fighter jets and the Indian Air Force's Suryakiran aerobatic teams are also showing off their skills during the air and maritime show.

I haven't been to one of these. Do people get a neck strain after an air-show, I wonder, but it would be nice watching it lying down.