It's a Chilly Day in Kuala Lumpur

Just when I was raving about the good weather a few days ago, it's been raining since yesterday morning. It wasn't heavy mostly but enough to dampen any spirit as we still have to stay indoors.

This is the monsoon season, this time of the year. There were on a few occasions in which school final-term exams had to be postponed due to the floods. Fortunately, this only happened in the north-eastern state of Kelantan. The monsoon also brought much devastation last year, or was it the previous year, to the people of the southern state of Johore. This year, the people and authorities are stocking up on items gearing up for any eventuality of floods again.

Looks like we'll have to bear with the monsoon rains before we get to enjoy the sunny period of the Chinese New Year.

This is the Kuala Lumpur skyline right now. I took this picture a little before 2pm. Parts of tall buildings are shrouded in clouds. It's chilly outside. A colleague who visited London and other parts of Europe recently, commented that the weather reminds her of the trip. 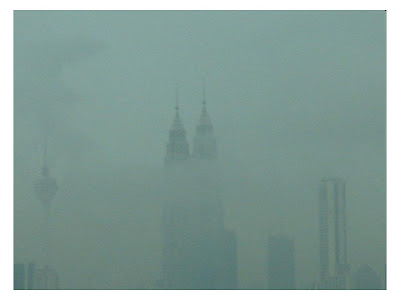 Posted by HappySurfer at 2:08 PM