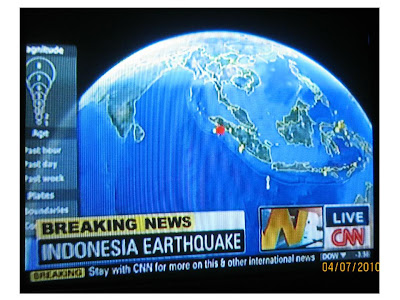 Breaking news:
A 7.8-magnitude earthquake has been recorded in Indonesia off the coast of north western Sumatra according to CNN. It has been reported as 46km or 28.6 miles down and struck 125 miles off the coast of Sibolga. The quake happened at 5:15am local time.

Local tsunami warning has been raised in Indonesia. Advice from experts is to stay away from the coastline/beach. A 7.8-magnitude is considered a major earthquake capable of causing considerable damage. So far, there's no report of damages or injuries.
Posted by HappySurfer at 6:59 AM